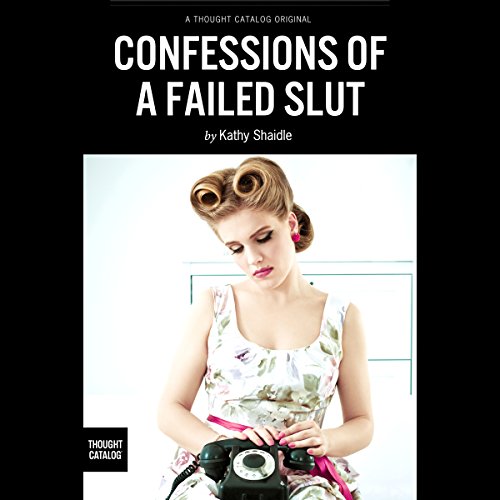 Confessions of a Failed Slut

As the only female columnist at controversial, conservative Taki's Magazine, Kathy Shaidle soon found herself covering an unlikely beat: sexuality. "Unlikely" because as the married, 50-year-old Shaidle explains, "my 'number' (as the kids call it these days) is so low that in certain Australian provinces I would still be considered a virgin." Confessions of a Failed Slut blends personal reflections - "How the Love Boat Ruined My Life" - with contrarian takes on porn (online and off), dating (ditto), "slut shaming," sex toys, "robot hookers of the near future," dinosaur erotica, the multiplication of genders and orientations, and what she calls "the epidemic of beta male faggotry" plaguing the land.

An author and blogging pioneer, Kathy Shaidle has been called "a night terror" (Wonkette), "one of the great virtuoso polemicists of our day" (Mark Steyn), "strenuously witless" (James Walcott), "a purveyor of some of the most offensive racial stereotypes I have ever read" (the Canadian Jewish Congress), "a Zionist shill for the New World Order" (InfoWars) and "not a particularly nice person" (Alex Koppelman, Salon.com).

What listeners say about Confessions of a Failed Slut

Canadian blogger Kathy Shaidle is opinionated, outspoken, offbeat, tactless, witty, snarky, often vulgar, and usually funny. She loves debate and she loves pushing buttons of SJW's (social justice warriors). Her blog is Five Feet of Fury, a reference to her short stature. The title Confessions of a Failed Slut is a fine example of her sense of humor; she failed as a slut because she never tried it. This short book consists exclusively of Kathy's reflections on a wide range of matters related to human sexuality from her conservative female viewpoint. The book is both funny and fun.

This book is not for everyone, but most people will find it interesting and fascinating. It is the "queen of shark" at her sharpest and best. The book is not even close to being pornographic, but the words tend toward every day vulgarity. I appreciate Audible Studios recording and distributing it.

A rant of epic proportions!

I'm not exactly how to classify this ...errr... 'document', but I sure enjoyed the heck out of it!

Ms Shaidle starts with a discussion of the downsides of too much casual sex that's both funny and insightful. I'm thinking 'when granddaughter turns 13 I should give her a copy of this'.

But then a little further I learn that there is a genre of adult fiction involving rough sex between young women and dinosaurs! I managed to make it to age 62 with knowing that, and frankly, I don't think I really needed that mental picture.....ever. But it's like a train wreck, you can't not look once the author points at it!

Maybe I'll wait until granddaughter is a bit older than 13 to give this book.

In general Ms Shaidle points out a lot of things that many fashionable and hip people do and say that are down crazy when you step back and look at them objectively. She makes you laugh, because otherwise you'd cry.

TRIGGER WARNING: If you are a 'social justice warrior' don't read this book unless you have a real sense of humor (unusual in SJW's, but I'm sure it's possible).

To me this one came off as a bitter boomer yearning for the old days when 18 year old's married in order to be able to have sex. The idea of excluding of teen mothers from the school annual in order to slut shame her is appalling. Even at 69 minutes (ah, irony) this one is too long, I only wish that to rate it I had to give it one star; it doesn't deserve one.

Waste of time and money

Maybe I missed something but I remember this book being pretty highly rated with other feminist content....
This was one of the worst most pointlessly offensive books I've ever read. If you want to hear the embittered rantings of an out of touch judgey woman who lives on a high horse and clearly, as her title would suggest, does not get laid enough, then you've come to the right place. This book will give you a good couple hours of hearing someone complain and be judgey and disturbingly slut shame pretty much everyone and everything in our culture from the last 40 years and call it challenging, analytical brilliance. Disappointed, insulted and annoyed is how I feel after spending a day with this "book." Who is validating this woman???