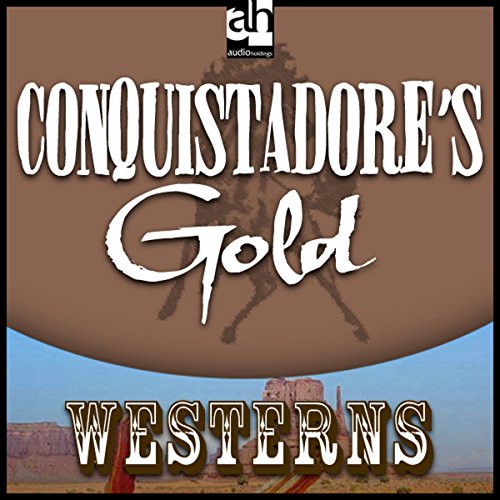 This mob did not want explanations. They wanted a hanging and a quick one. Summoned by a mysterious letter, Howdy McFee and his amazing horse Pink ride to save his uncle's ranch. There's big trouble waiting for them - a crooked lawyer, a pack of hired killers, a crazy prospector, and a fiery, beautiful woman. What do they all want? When will the disasters stop? Can Howdy sort it out before he's shot or hanged?

Skilled voice actor Christopher Graybill brings a youthful energy to this old-fashioned tale of fast horses, faster women, and a full cast of Wild West characters embroiled in the violence and intrigue inherent along that untamed frontier.

T. T. Flynn’s Conquistadore’s Gold tells the story of Howdy McFee, whose quest to save an Uncle’s ranch is made difficult by seemingly endless - and possibly deadly - complications... Graybill is an animated performer, and especially good at bringing this audiobook’s action sequences to life, emphasizing the raw vitality of life along the borders of civilization. Listeners will find themselves dragged into the rich tapestry of this engrossing tale of one man’s quest to restore order in a chaotic world.

Conquistadore's Gold is a great story. Kept me interested and entertained.