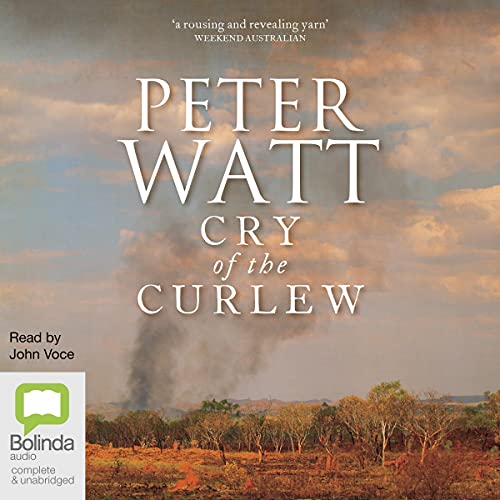 Cry of the Curlew

Cry of the Curlew is the first best-selling title depicting our turbulent history as never before by Peter Watt.

A stark and vivid novel of Australia's brutal past.

An epic tale of two families, the Macintoshes and the Duffys, who are locked in a deadly battle from the moment squatter Donald Macintosh commits an act of barbarity on his Queensland property. Their paths cross in love, death and revenge as both families fight to tame the wild frontier of Australia's north country.

"The home grown version of Wilbur Smith." (The Sunday Age)

"The historical detail brings the 19th century to rip-roaring life." (The Australia)

What listeners say about Cry of the Curlew

Not a Novel about UK, it's about Early Australia.

I tried to like this book and find some redeeming qualities about sadistic sad sack of pathetic garbage I really did. However like a bad film you don’t want to give up on I kept going but by chapter 30 I’d had enough. If this is what passes for literature in the UK I weep for our nation. It’s violence against women is graphic and shocking titterlating men into thinking this is ok. When clearly it NOT! Since Sarah Everard was killed by a serving policeman a yrs sgo another 125 women have been murdered in the UK. This sort of drip drip violence against women does not help. It’s drivel don’t waste your hard earned money on this sort of thing… you have been warned!

loved it, I can't wait to hear the next 11 books! written in such a way I feel like I know them all.

Well Worth A Read!!

I thoroughly enjoyed this book & look forward to the next in the series.
The narration was excellent!!

Australian storytelling of its chequered history

the story of the early settlement and conflicts mixed with love. truly entertaining but revealing of Australia's dark history

Read all Peter Watt books years ago and so happy to hear them on audiobook and wonderfully read by John Voce. Once again couldn't put it down. Love this tale of the two families in our beautiful country Australia. So looking forward to hearing the next one in this series.