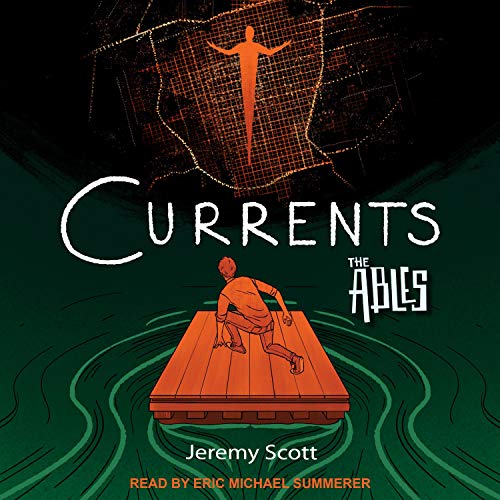 Set four years after the events of Strings, Currents finds the Ables gang about to start their second year at Goodspeed University. Phillip is struggling more than ever with anxiety and PTSD, and he continues to feel tremendous guilt over the loss of a friend. It's haunting him. He's having vivid nightmares, passing out frequently, and starting to question his role in the world.

On top of all that, he's taking his first public-speaking course, and the learning curve is steep - though he does make a new friend in the class. Phillip also finds himself truly blind once again, with no one to give him even temporary sight. He and his girlfriend, Emmaline, have created a sort of shorthand that allows her to communicate enemy positions so that Phillip can still be an effective crime fighter. Sherpa, his dog, is proving just as helpful during hero work as she is in the day-to-day things with which Phillip needs help.

There's more distance between Phillip and Bentley now, and the reasons aren't entirely understood by either of them. As Phillip tries to keep it together and rebuild an old friendship, the group of college heroes chases a new energy-hoarding villain across the globe, desperate to understand the danger in time to stop it. By the end, few of them will ever be the same.

What listeners say about Currents

I adore the concept of the Ables and was blown away by the first book. I had issues with the second but it was still great. The third installment is also in need of more depth and lacks the original passion of the first book. I don't know if this is a decision by the author, like making the book a symbol of his own feelings about life and about his decision about his story, but I felt like this book focused solely on Phillip and his mental health issues.

I actually enjoyed it and found Phillips's struggles to be completely relatable and accurate. I even used some of the advice from the therapist's advice and did some deep thinking of my own. I love stories that make me do my own homework into my own psyche. Aside from that, I didn't see much growth with any other characters.

This is an obvious conclusion to the story with Phillip and if Jeremy decides to write anymore, which I really hope he does because this series and concept are great, then it will be with a new MC perspective. I am sad to see this temporary ending though as a lot of questions weren't answered and there are some obvious plots still open...I still don't understand why Jame's death was not explained but still impacting Phillip.

Still enjoyed it and agree with other reviews where the tone was not a good fit for a conclusion, the last 11 minutes just dropped the bomb and I was left with a so many questions.

I have been a fan of this series since the beginning and spend a lot of time thinking about it and even I didn’t expect some of the twists and turns. The main villain throughout most of the story was great and the roof feel that he is not actually the main villain is also great. The ending was kind of somber but I think that’s the point. Jeremy has confirmed on Twitter that there will be a fourth book so I’m intrigued to know how that’s going to work knowing the ending. I would recommend this book specifically to people who have read the first two and like them but I have recommended the series as a whole to most of my friends.

episodic rather than serial

this seemed more monster-of-the-week than conclusion to the series. Certainly you can tell that, by the end, it is reaching the conclusion, but it seems like the big questions you ask from the first and second books are immaterial to the author. possibly, it's the author's intention that those aren't the questions to ask. it doesn't give any answers though, and that's disappointing.

I'll listen again and see if I missed something.

Nothing felt right, how the characters seemed to behave for the purpose of the story. I won't spoil it because much like myself you'll probably get this to seem for yourself how everything is dealt with after the last book. It do not deliver. There are many threads still lose and even gains more by the end. Sometimes the logic of the story seems backwards or non existent, which hurts me to say as I loved the ables. A brilliant concept but from that point onwards seems like the most important parts of the world building happen between books.