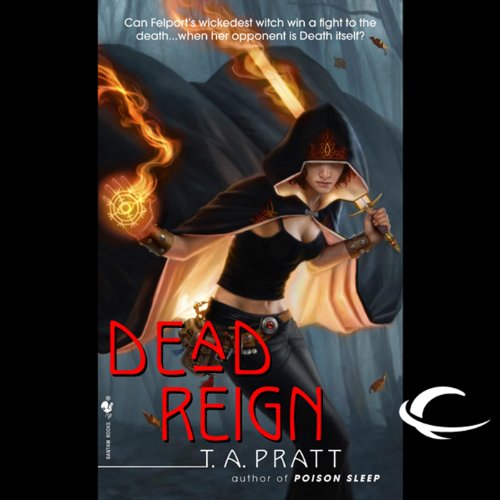 Written by: T. A. Pratt
Narrated by: Jessica Almasy,T. A. Pratt (Introduction)
Free with 30-day trial

As chief sorcerer of Felport, Marla Mason thought she'd faced every kind of evil the magical world had to offer. But she's never faced a killer like this. He's dark, glib, handsome as the devil - and exactly who he says he is. Death - in the flesh. He's arrived in Felport with a posse composed of a half-insane necromancer and the reanimated corpse of John Wilkes Booth, and he isn't leaving until he gets what he came for. Only Marla is crazy enough to tell Death to go back to Hell.

With the Founders' Ball just around the bend, drawing together the brightest, meanest, and most dangerous of Felport's magical elite, the last thing Marla needs is all-out war with the King of the Underworld, but that's exactly what she's got. As the battle lines are drawn, she can count on her hedonistic, body-hopping partner Rondeau...but how many of her old allies will stand by her side when facing the ultimate adversary? To save her city, Marla will have to find a way to cheat Death...literally.

What listeners say about Dead Reign

I almost put this one back on the shelf after the first hour, but gradually it became more entertaining, and I stuck with it. The world of the series and the vocal style of the narrator were both reminiscent of Buffy, and while I am not a big fan, I assume that will be an attraction for many listeners. For me the best aspect of this book was the creation of some appealing and delightful characters. Unfortunately, for most of the book, their choices are predictable and uninspired, and the "deeper" aspects of moral conflict are disappointingly obvious. Still, by the end I was enjoying them and did not regret sticking with the book.
WARNING. If you have not read the earlier titles in this series do NOT start with this book. It is full of spoilers about important plot turns from earlier episodes.

So much fun I'd buy the series twice!

I envy anyone who will discover Marla Mason and her world. I got halfway through the first book and I was hooked! Funny and fabulous with a wacky cast of characters, T. A. Pratt's series is pure delight. Please bring us book 5 soon! A totally unique listening experience -- and one of the best narrators out there! Thank's T.A. for great entertainment!

If you're looking for a breezy, punch-a-monster-in-the-face urban fantasy, step right up to the Marla Mason series and "Dead Reign."

This time out, Marla has to go head-to-head with Death. This creates all kinds of problems for her (naturally!) and one of the great pleasures of this outing is that Marla really gets pushed out of her comfort zone, both figuratively and literally. (And...into hell.) It's also feels like the most ensemble pieces of the story this far out. Rondeau, in particular, really gets to step into the limelight, and it's a lot of fun to watch.

Jessica Almasy's reading is such a blast. Her reading of the characters is superb and consistent, and her delivery can be both nail-biting and laugh out loud hysterical. Her mummified zombie John Wilkes Booth is a nice spin on Southern Charm, Rondeau is tough yet heartbreaking, and - as usual - she's pitch perfect as Marla. I've enjoyed her readings so much, I'm tempted to go back and listen to the books in this series that I'd already read.

I don't think you really need to have listened to the other books prior to this one, though it certainly wouldn't hurt (and really: Bone Shop is soooooooooo much fun).

All around, a great way to spend a couple of days listening.

This book is amazing, along with the others. Fantastic bad guys, imperfect heroine struggling with a nasty past. I love the dry humour and witty repartee. T.A. Pratt knows how to make some morale characters.

Listened to this while driving and enjoyed it. The narration was good and lets face it when you buy this you know you are not buying Shakespear. Its a light, good story thats a good example of its type. I will be getting others in the series.

I was hoping to enjoy the whole series, as I like urban fantasy. The writing in Dead Reign isn't helped by having a narrator with a high, fast, breathy voice- when she interupts a necromancer in a midnight graveyard and says 'You've been a bad boy' she doesn't growl the phrase- she sounds like a rather arch nursery teacher. But I just don't think the writing is good enough to let me finish one book, let alone the series.

I have loved all these books but this one with the introduction of some new characters ( fun and interesting ones) and bringing back one of my favourites put a big smile on my face for the whole book. I am pleased with the narrator's voice and find it pleasing to listen, with good expressionistic readings and tone for the characters. I am all about the story, clever and well-defined characters, with a pleasing narrator, and this one rings every bell.