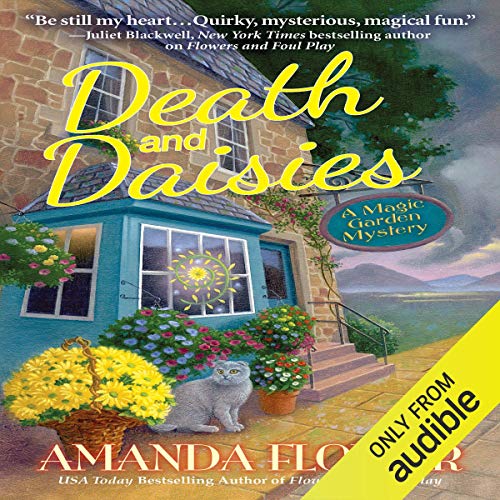 Florist Fiona Knox left behind her gloomy life for a magical garden in Scotland, but a murder on her shop’s opening day spells doom.

Fiona Knox thought she was pulling her life back together when she inherited her godfather’s cottage in Duncreigan, Scotland - complete with a magical walled garden. But the erstwhile Tennessee flower shop owner promptly found herself puddle boot deep in danger when she found a dead body among the glimmering blossoms. One police investigation later (made a trifle less unpleasant by the presence of handsome Chief Inspector Neil Craig), and Fiona’s life is getting back on a steady, though bewitched, track. Her sister Isla has just moved in with her, and the grand opening of her new spellbound venture, the Climbing Rose Flower Shop in Aberdeenshire, is imminent.

But dark, ensorcelled clouds are gathering to douse Fiona’s newly sunny outlook. First, imperious parish minister Quaid MacCullen makes it undeniably clear that he would be happy to send Fiona back to Tennessee. Then, a horrific lightning storm, rife with a terrible omen, threatens to tear apart the elderly cottage and sends Fi and Isla cowering under their beds. The storm passes, but then, Fi is called away from the Climbing Rose’s opening soiree when Kipling, the tiny village’s weak-kneed volunteer police chief, finds a dead body on the beach.

The body proves difficult to identify, but Kipling is certain it’s that of the parish minister. Which makes Fiona, MacCullen’s new nemesis, a suspect. And what’s worse, Isla has seemed bewitched as of late…did she do something unspeakable to protect her sister? The last thing Fiona wanted to do was play detective again. But now, the rosy future she’d envisioned is going to seed, and if she and Craig can’t clear her name, her idyllic life will wilt away in Death and Daisies, national best-selling author Amanda Flower’s second enchanting Magic Garden mystery.

What listeners say about Death and Daisies

Story fine but too much southern drawl

I prefer more mystery and less side story. Sometimes there is so much side story the it makes me wonder, " Where is she going with this"? It took five chapters before she started the mystery. Disputes that , it was a pleasant mystery. I know that Fiona is from Tennessee but the southern drawl is beginning to bug me. I would prefer the narrative be in regular English and the dialogue have the Southern drawl like the Scottish dialogue. The story drags along because Eilidh Beaton speaks so slowly narrating with that dra-a-a-wl. I will get the next book and hope there will be some improvements.

Not good at all.

I remember when I read the first book in the series and having the same reaction to the narrator's accent. It's awful, jarring and what's worse is that the narrator must be from the UK or Australia. She pronounces the 'a' at the end of a name or word as 'er'. If the narrator was trying to speak with an accent from the US south she must have realized that she was doing it wrong. I finished the first book in the series because I thought the story was pretty good and I liked the main character. But this time the book doesn't even have a good storyline to it's credit. I really disliked the sister, and the village policeman. I like the premise of the story but I find myself unable to finish listening to the book.

My ears are bleeding

It was not until this audiobook that I understood what other reviewers meant when they said ‘maybe they would have liked the story if they had just read it’. This narrator is truly awful. For Heaven’s sake, if you are British, do NOT try to speak with a Southern accent (USA variety). What’s the point when you pronounce words like schedule as the British do?

WITH A PROMISING FUTURE. I AM ANXIOUS TO SEE WHAT. MORETHE GARDEN CAN DO AND RATHER MISSED IT IN THIS BOOK. BUT THIS ONE MADE UP FOR IT WITH THE DEVELOPING VISIONS AND RELATIONSHIPS. THE READER'S ACCENT IS A BIT MUCH, ALMOST TO THE POINT OF ANNOYING. AS A TEXAN, I RECOGNIZE OVERDONE ACCENTS, AND THIS CERTAINLY SEEMS TO BE ONE, ALONG WITH MISPRONUNCIATIONS. HOWEVER, I PLAN TO CONTINUE THE SERIES; SO IT MUST NOT CROSS THE PROVERBIAL LINE.

Despite the fact that the narrator mis-pronounces several words, I thoroughly enjoy the 2 books in the series.
I can't wait for the next one.

I thoroughly enjoyed the narration and the story. Would definitely recommend this to any fans of Amanda Flower. Cannot wait to read what's next for Fiona and Chief Inspector Neil Craig.