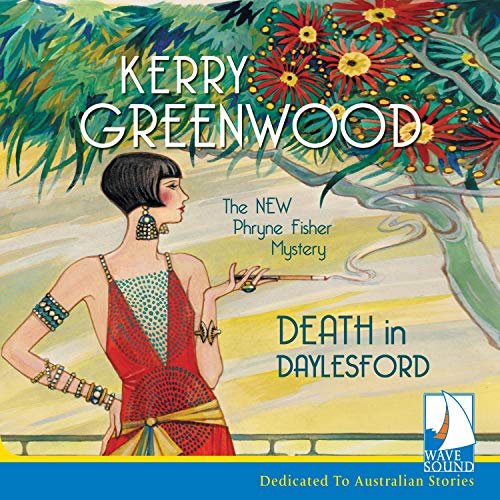 When a mysterious invitation arrives for Miss Phryne Fisher from an unknown Captain Herbert Spencer, Phryne's curiosity is excited. Spencer runs a retreat in Victoria's spa country for shell-shocked soldiers of the First World War. It's a cause after Phryne's own heart but what could Spencer want from her?

Phryne and the faithful Dot view their spa sojourn as a short holiday but are quickly thrown in the midst of disturbing Highland gatherings, disappearing women, murder and the mystery of the Temperance Hotel.

Meanwhile, Cec, Bert and Tinker find a young woman floating face down in the harbour, dead. Tinker and Phryne's resilient adopted daughters, Jane and Ruth, decide to solve what appears to be a heinous crime.

Disappearances, murder, bombs, booby-traps and strange goings-on land Miss Phryne Fisher right in the middle of her most exciting adventure.

What listeners say about Death in Daylesford

I was excited enough at the thought of a new book in this series that I ignored the reviews. As a New Zealander I wondered if it was just that people were unfamiliar with mine and the Australian accent. Alas, no, the accents are all wrong, unnatural, apart from moments when the narrator slips into her own native accent. Isn't it fasinating how a narrator can blur the quality of the writing ....I did not enjoy this book and will return it.
How you are missed Stephanie Daniel.

Great story ruined by the narration

Another great Phyrne story but as per the other reviewers I was horrified by the narration and struggled to immerse myself as usual. Julia Franklin herself is a wonderful narrator but the wrong choice for these books as the accents were all wrong. I've listened to other series where a new narrator has been needed and I usually settle in after a few chapters. But Julia was neither similar or wildly different enough to make the leap and it's a shame as the story was as good as the rest of the series. I hope the next book finds someone new or I will be reading on my kindle not listening.

I am not sure why this narrator speaks in jerks and starts but it is extremely irritating. Her attempts at Australian accents were cringeworthy - like bad, bizarre attempts at a New Zealand accent. Indeed all the accents were dreadful. The story, however, was very good, I loved the Daylesford setting and it had just the right amount of suspense and atmosphere - it is only because I was enjoying the story I put up with the truly awful narration.

I enjoyed the story. Narrator was fine with the descriptive text and Miss Fishers voice but all the other voices were awful. She needs to work on getting the Australian accent right.

Phrynie on form as usual. Shame about the narrator.

The usual two mystery format is different here as Phrynie’s child protégés get their own mystery in addition to her own mystery. The down side here is the new narrator who just doesn’t fit the series.

I LOVE Phryne Fisher. I was so excited to get this story on audible & eagerly awaited my trip away to listen to it. WHAT A NIGHTMARE! The narrator is DEAD. SET. AWFUL. Everyone, even those who have a quote “proper upper class Australian accent” have a NZ accent apart from Phryne. It drove me nuts. The story is good. The narrator is horrendous.

i would like this book so much more if i could understand what the reader was saying. Awkward accent, halting, pecking pace, strange pronounciations and all over abysmal. Buy the book.

I downloaded this with the sad knowledge that the narrator of the previous 20 Miss Fisher novels (described by the author as THE voice of Phryne Fisher) passed away in 2013. I was prepared to accept a new voice.
However, most of the characters sound like they have migrated to New Zealand. The narrator has a pleasant voice but completely unsuitable for reading this novel.
The reading lacks the emotion & hint of playfulness that Miss Fisher novels demand, and some of the character's voices sound the same. The narrator's emphasis on the second syllable of Phryne's name is especially grating.
I cannot finish listening to this- hence I can't rate the story.
Read the book instead!

I am devastated that u had to stop this book. I have every single other in the series and kisten to them many times each. But this one - I just couldn't get past chapter 3 as the voice and shockingly over done New Zealand accents just frustrated me.

I didn't even have a chance to take in the story.. let alone hear enough to rate it.

Do people really not know that Australia and New Zealand are different countries with very different language patterns??

I've been waiting for another Phryne mystery

I always enjoy the Phryne stories and this was fun as we had Dot and Phryne in Dalesford investigating one set of murders and then Tinker, Hugh, Jane and Ruth in Melbourne with another.
It was interesting to have a new narrator, her voicing of Phryne was enjoyable but some of the working class Australian accents seemed to have all turned into Kiwis. The vowel sounds, far more clipped NZ than drawling Oz, that was very disconcerting. But I think I might prefer her to the previous narrator with her awful singing.

unfortunate that the perfect performances for ALL of the previous books could not be repeated? Didn't this performer even listen to any of the previous readings in order to at least get an approximation of the characters and delivery? Her selection of different voices made by broader and flatter speech (that was supposedly Australian), was appalling. If this is anyone's first listen to a phryne fisher story, please don't be put off, but try ANY OTHER book in the series to hear how it should be done so beautifully. I'd love to hear this re-recorded and released again.

So glad to have a new Kerry Greenwood

So glad that we have another Phryne Fisher mystery.But where is Stephanie Daniels? Narrator is not good.

I could not enjoy the story because of the terrible narration. Did no one actually audition this person?

Great story up and down, sing song narrator made me feel sea sick, could nearly finish listening to it. Sorry Kerry.

dreadful reading, phasing and character voice just annoying. probably a great story but I'll have to read it to find out.