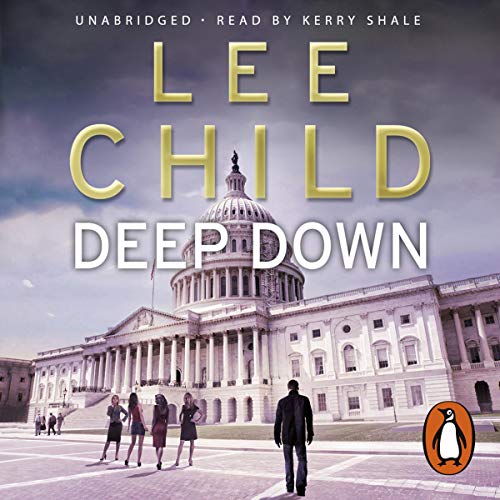 Early in his military career, Jack Reacher is ordered undercover in Washington, to discover which one of four women, all staff officers on fast track careers, is leaking secrets. The suggested method: get close to each in turn. The obvious problem: the most receptive will be the guilty one, with an agenda of her own - to kill the investigation ... and the investigator.

What listeners say about Deep Down

I Wish Was A Full Novel!

I would recommend it if they liked a short story, however, I felt ripped off as I became engaged with the book and the story and the excellent narration,but then the book finished before I knew it! Rrrrrrrrrrrrrrr!

Would you be willing to try another book from Lee Child? Why or why not?

I would read another book by Lee Child and have, but not another short story, because the novel gives you a chance to enter into the bigger story, while the short story gets you in and pulls the rug from under you.

Have you listened to any of Kerry Shale’s other performances before? How does this one compare?

Yes. An outstanding narrator and well worth listening to future stories narrated by this narrator.

Did Deep Down inspire you to do anything?

Lee Child in conjunction with Kerry Shale will taunt you by getting you into the short story. They get you excited and engaged in the story and then bring you crashing down as you realise the story has ended and you need to find another novel or audiobook! Hopefully it was as good as this story before the rug was ripped from under me!

Not the usual Reacher Voice…

…but still the usual Reacher style. Amazing story telling, Lee Child can seemingly do no wrong!

I would have loved this to have been a full blown novel, but as a novella, it had the right pace & intrigue, and ultimately an enjoyable ending! (I do miss the 'old' Reacher though.

Lee Child Reacher books are the best, I didn't like the guy reading this book, others have done better. This guy didn't understand Reacher character so could not portray him accurately.

A waste of good money which wasted one credit. Should have seen it was a short story.

The thing I like about this book is it’s predictable... You know Reacher isn’t going to lose. He might have a bump n a scrape on the way but, so what 6 foot something weighing 200 and something pounds moving steadily and swiftly... The other guys might as well just search for their pension books 👍

What would have made Deep Down better?

A plot. This isn't as idiotic as "not a drill" but still a third class efford from Lee Child.

What was most disappointing about Lee Child’s story?

The whole thing could have been developed into a decent book, but as it was the plot seems incomplete and full of holes, and none of the charactors are developed. The whole thing is short and expensive for what it is.

Disappointment, feeling that as a reader we are being taken advantage of.

A short story can be an absolute joy if the the distilled essence of a story is masterfully told and elegantly presented. This just has the flavour of an author who, now he's signed a hollywood book deal, doesn't feel the need to try anymore. Next thing you know he'll be co-writing his books with some unknown hack just like that other prize pratt Clive Cussler who now writes with his son whom he named after his lead character. Al least Lee Child doesn't make cameo appearances in his own books like Cussler, but it's a slippery slope Lee Child, so buck your ideas up!

some character development but abruptly ended so no real reason to establish characters. i wouldn't bother