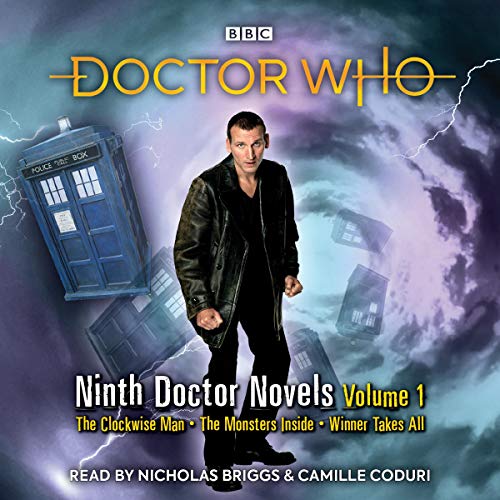 Nicholas Briggs and Camille Coduri are the readers of these three original novels featuring the Ninth Doctor and Rose, as played on TV by Christopher Eccleston and Billie Piper.

Join the Doctor and Rose on these journeys in Time and Space as they encounter faceless killers in 1920s London, get trapped in an alien prison camp and discover something very sinister behind the latest video game craze.

The stories are The Clockwise Man by Justin Richards, The Monsters Inside by Stephen Cole and Winner Takes All by Jacqueline Rayner. Based on the hit BBC TV series.

Nicholas Briggs has provided the voices of the Daleks, Cybermen, Ice Warriors and numerous other alien characters in the Doctor Who TV series. Camille Coduri played Jackie Tyler in several episodes of the series from 2005 onwards.

9th Doctor Adventures with Rose Tyler. I listened to this book while working. The narrators are amazing.

Just what I've been waiting for!

I absolutely love these audiobooks the narrators really do the stories justice. I've always been hesitant to buy them individually because there are so many and the price quickly adds up, but now that these omnibuses are available it is so much better!

Definitely get them you won't regret it. Bring on volume 2!