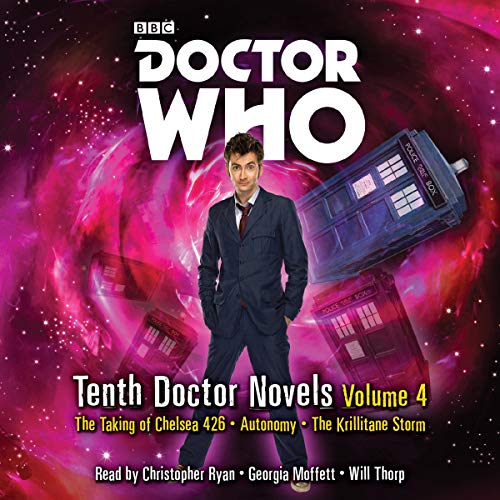 Christopher Ryan, Georgia Moffett and Will Thorp are the readers of these three original stories featuring the Tenth Doctor, as played on TV by David Tennant.

Join the Doctor on these journeys in Time and Space. In The Taking of Chelsea 426, he visits a city-size colony floating on the clouds of Saturn, just as some familiar foes arrive: the Sontarans. In Autonomy, an unspeakable terror is lurking on Level Zero of Hyperville, the hi-tech, 24-hour entertainment complex where the stage is set for a battle with the Autons. In The Krillitane Storm, the Doctor finds medieval Worcester threatened by the legendary Devil’s Huntsman, in reality a menace he has encountered before.

The Taking of Chelsea 426 by David Llewellyn. Read by Christopher Ryan.
Autonomy by Daniel Blythe. Read by Georgia Moffett.
The Krillitane Storm by Christopher Cooper. Read by Will Thorp.

Based on the hit BBC TV series.

What listeners say about Doctor Who: Tenth Doctor Novels Volume 4

This is the first doctor who book I have ever returned. I didn’t make it thru to the end. One of the stories was not read well for me at all. Hard to tell when a different character was speaking as it sounded exactly the same with no different inflections. Making it hard to understand who was talking. Could of been partly story plot. I had to rewind it several times to try to figure out who was talking and what was going on. Finally gave up.

Where to begin. The middle story was the only good one, which I heard before because I purchased it earlier. These stories are unmemorable. If I am goi g to spend money on an audio book, I want to listen to it again and again.... Not this one

The 10th Dr novels are so amazing.

These novels allow me to explore the adventures of the Doctor and his companions on the go.

The first two were ok, the third was really good.

Overall it’s ok. I really enjoyed The Krlillitane Storm, but the others aren’t as good. I’ll give them another chance sometime - maybe they’ll grow on me or perhaps I need to read rather than listen to them?

Another story about the Doctor whilst he’s travelling alone. This book is 5hours 2minutes 54seconds long.

It’s okay. The story seems a bit long winded and is unmemorable because of that. The narration is pretty good and the storyline itself, if condensed, could be very good.

The Doctor lands on Chelsea 426, a human colony which exists on platforms orbiting Saturn’s upper atmosphere. Whilst he’s visiting a local store the Doctor becomes suspicious about the shopkeeper because of the way he talks, specifically he says ‘that is affirmative’ rather than yes. Between that and the first Chelsea flower show happening, the Doctor knows something strange is happening- but what.

Vienna and Jake Carstairs and their mother have a spare ticket to the flower show and invite the Doctor along, he happily accepts. The Doctor becomes increasingly worried and warns Jake that when he says now he should get his mother and sister away from there.

It’s not long before the plants start spewing spores everywhere, infecting the humans and the children, and the Doctor are running for their lives. When they reach the outside world, the Doctor leaves the children, heading back inside for their mother.

Soon the Doctor not only has the Rutan spores to contend with but the Sontarans aswell.

Can he save the humans, the colony, from these warring aliens?

The Doctor is still travelling alone for this book. The book is 6 hours 6 minutes 54 seconds long.

The Doctor arrives in a massive entertainment complex called Hyperville. Whilst he’s there he discovers that the plastic mannequins and models have started coming to life and attacking people.

Whilst getting to the bottom of this he meets a woman called Kate Maguire, who is undercover, trying to discover what’s really happening to Hyperville. He also meets two teenagers called Reece and Chantelle, their mum and her boyfriend, a superstar named Shaneeqi, her husband Paul, captain Tess Tilbrook, Max Carson, Elizabeth Devonshire, and Sir Gerry Hobbs-Mayhew.

He soon meets the Nestene Consciousness and things really heat up!

Can the Doctor save the world from living plastic again?


The Krlillitane Storm
Written by Christopher Cooper
Read by Will Thorpe

Another adventure where the Doctor is travelling alone, after leaving Donna. It’s 5 hours 21 minutes 1 second long.

I don’t know what to say about this one. It’s really good, by far the best book of the three.

It’s well written and immerses you in the storyline. Will Thorpe reads it well.

The Doctor lands in medieval Worcester and finds deserted streets and people terrified. He gains entry into a tavern and is told about the Legendry Huntsman, who hunts them down in the night - the reason they’re so terrified.

After they hear a scream the Doctor races to help. He finds a man being ripped apart by none other than a krillitane. Unfortunately for the Doctor, the krillitane flies away before the guards arrive. Upon finding the Doctor there they arrest him as the huntsman and parade him through the streets to his execution.

A woman, named Emily, rushes to his rescue, claiming to be his wife. The captain decides to put them under house arrest whilst he speaks to the sheriff.

But the Doctor has an adventure to go on, and he and Emily will have to navigate this medieval world in search of the enemy’s of Earth. Will they get to the bottom of this mystery?

I thoroughly enjoyed the first two stories - the third not so much. Now I need to find more ‘Tenth Doctor’ compilations.