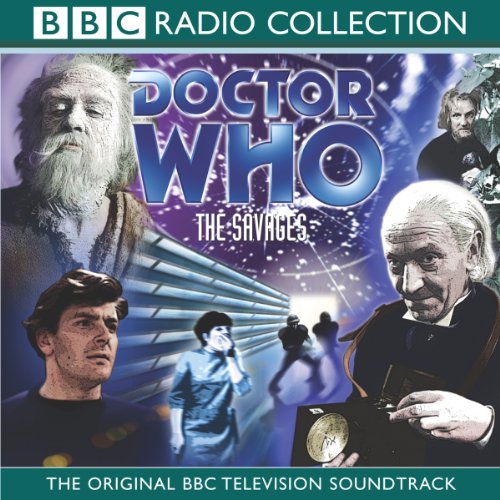 William Hartnell stars as the first Doctor in this exclusive recording of a 'lost' television adventure.

When the TARDIS materialises on an alien planet, the Doctor insists that he and his companions have arrived in the far future. Steven and Dodo think otherwise, however, after they encounter a band of cave-dwelling primitives who are terrified of strangers.

The travellers soon discover that the planet's population is divided into two castes, and that the professed idyll of the Elders, who inhabit a technologically advanced city, seems oddly dependent upon the unsophisticated Savages.

Whilst the Elders' leader, Jano, welcomes the Doctor into their society, Dodo stumbles upon a dark secret at the heart of the community. The truth behind the Elders' great knowledge is eventually revealed, and the Doctor sees it as his duty to end a terrible case of exploitation. Yet Jano has plans of his own for the Doctor....With the Doctor's faithful companion Steven discovering that events on this planet will irrevocably shape his destiny, The Savages marks the final appearance in the programme of Peter Purves, who also provides the linking narration for this release.

What listeners say about Doctor Who: The Savages

Good send-off for companion Steven, played by Peter Purves who narrates this CD, the Doctor's other companion, Dodo (Jackie Lane) leaves in the next story, which was The War Machines. The audio (from an off-air recording by Graham Strong when it first aired in 1966 is excellent).

The final screen appearance for Steven Taylor and it's a surprising solid story. At the beginning, I thought we would get something akin to the, Caveman scenes of 100,000 BC Instead, the story takes a turn as we learn the nearby society has built it's prosperity on stealing the life force from "Savages," another race they argue are inferior.

There's a wonderful core story here and it's helped by a great final performance from Peter Purves as Steven is given a great chance to show his heroism one last time. The Doctor has a great speech to the council. The story is not without faults, hurt by a bit of padding in the early episodes and a contrived change that's key to the outcome of the story. Still, this is fitting send off for Steven.

Classic Doctor Who at its best.

Great story. An alien civilization that uses innocent simple people's life force to make their selfs a race of super people, isn't going to sit well with the Doctor. So you know he's going to have stop them. Nice little story about morals and the rights of sentient races to live their lives without their rights taken away from them. The Doctor also loses his companion Steven. Who's helped him fight the Daleks and other Evil beings through out their travels. I hope he enjoys his new job. Great story to listen to.

Toward the end if an era

Hartnell's First Doctor is already declining and goes through some mind and body draining experiences. This story foreshadows his regeneration -one if the brilliant ideas behind Doctor Who. Plenty of violent action for Stephen, leading to the end if his time as a companion. Dodo is the classic 60s screaming helpless female companion, and this us her last appearance in a complete TV story. A straightforward plot has the Doctor and companions fighting oppression and exploitation. Well narrated with a fast pace. Viewed as a product if its time it works, but Dodo seems too feeble and helpless to be a companion now.

Complex moral dilemmas, alien civilisations, human drama and political conspiracies - it could only be Doctor Who. This storyline marks the departure of regular companion Stephen who was portrayed by Peter Purves who provides an engrossing narration for this fun little adventure. It's a shame this story was lost but at least the audio survives and this is the best way to enjoy it, in your mp3 player.

Old ones are the best!

Brilliant story and well told. Its great being able to listen to them all. Classic Doctor Who

A generally overlooked lost story from the early years of Doctor Who and one that offers a simple morality play within the confines of the early series remit. Fine if you can accept that a whole planet may be populated by a small populace of nevertheless civilised humans with technological capabilities, and similarly well developed 'savages' on the outside of their city. This also sees the departure of companion Steven Taylor, played by Peter Purves who as usual provides skilled narration which adds dramatic weight to the proceedings of which we cannot witness (visual elements lost as only the soundtrack survives). His departure is a bittersweet one, as whilst he has been offered the chance to lead these peoples to a better united future, one cannot help but feel that it is a bleak outcome for Steven who has witnessed so much in his travels with the Tardis crew. Given that Dodo was to be written out hurriedly in the opening of the following story, one must be thankful that this key companion had such a thought provoking departure. Whilst the story is far enhanced by accompaniment of the Telesnaps archive available on the BBC website (you need to search for them as they are on an archived page and no longer directly linked) it does stand up as a rewarding listen. Perhaps more so due to the theatrical quality of the play. The story also provides good material fro William Hartnell whose Doctor is pivotal to the proceedings. Recommended.