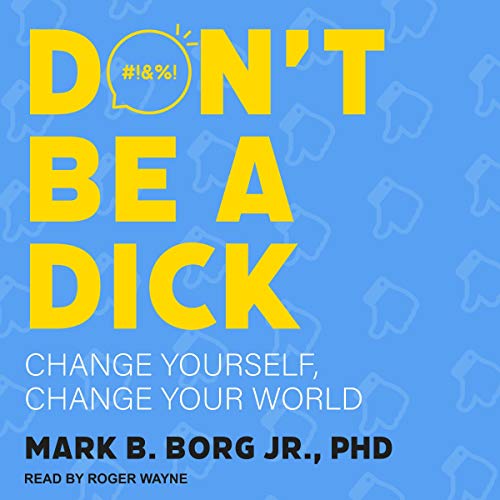 Why this book? Because you might be a d--k: a mean-spirited, self-serving individual who thinks and acts as though everyone else in the world can only be understood - and whose only importance is defined - in terms of their relationship to himself or herself. That's right, herself. Because anatomical evidence aside, dicks can be women, too. Being a d--k might feel powerful in the short-term, but it is probably not helping you much in the long-term, because this flawed character trait is exactly what is keeping you from attaining what you may want most: personal satisfaction, a steady job, a loving committed relationship, and/or lifelong friendships.

Anyone, at any time, can slip into being a d--k - and many do. Yet Don't Be a D--k is especially for people who have noticed how their own behavior tends to backfire, leaving them feeling isolated or uncertain why their seemingly justified actions consistently have such poor results. If you're constantly using the refrain, "It's not me, it's them," whenever something goes wrong, Mark Borg is here to tell you that it is, in fact, you. The good news is there is something you can do to reverse these behaviors and live a happier, more fulfilling life.

What listeners say about Don't Be a Dick

I cannot possibly be the only person who thought when I saw the title to this book: YES! I cannot wait to buy a stack of copies of this book for the jerks in my life! Finally, a book for that relative who cannot resist the plunge into the political discussion that ruins the holidays every year, or my colleague who harasses and abuses me day in and day out in the office, or that ex who dashed my heart (two decades ago), or...

Alas, that book is NOT this one.

In fact, there are a few sharp turns that one is challenged to adjust to when orienting oneself to Dr. Borg's solo project, "Don't Be A Dick":

1. The William Alanson White Institute-trained psychoanalyst of the illustrious Irrelationship series has penned a book that requires the traditional brown paper bag cover if you want to read it in public.

2. While imagining a wild guffaw like "F— Feelings," or a raucous hardy-har-har like "A**hole, No More," Dr. Borg quickly makes it clear that this book is no joke. In fact, he is deadly serious about recovering from what he calls "dickery," and dedicated to helping me, the reader, do the same.

3. One might crack this book bracing themselves for a good self-flagellating spanking, having their narcissism, self-absorption and bad behavior confronted and then pried from their habitual clutches. But instead, Dr. Borg offers understanding, compassion, and an openness to receiving love and care from others as well as a consistent plea for self acceptance.

Yes, I was at first blown away that a book with this title would take on the challenge of helping the reader, me, address my own anxieties and insecurities and the ways they are acted out in "dickish" behavior. But as I read on, I found myself becoming increasingly optimistic about the possibility of understanding, working through and letting go of those troublesome behaviors that, as Dr. Borg suggests, are the equivalent of walking through my world wearing a "kick-me" sign.

Full reveal here: I am one of the ones that bought this book for someone else. I am one of those people who thought: Oh, I have a whole clientele of persons who'd be much better off NOT BEING DICKS! Only to find out that it is that kind of thinking that qualifies someone, in the author's use of the term, as a dick. And that is perhaps the most startling bait and switch operation: That one can examine their bad and off-putting behavior, and see that the very behavior that has put us at war with the world and ourselves, when relinquished, can be the arch through which we walk through to find greater self-awareness, -care, -acceptance and -love.

As a shrink myself, I might have titled this book, "The Deep Psychology of Dickery" (a word Dr. Borg uses throughout the book). And though categorized as "Anger Management," as someone who treats couples, I can wholeheartedly recommend this as a book that is really about healing our relationships with others and ourselves.

Ummmmmmm...by the way, am I the only one who in a million years would NOT have guessed all that from the title?!

super insightful book on the art of dickery that some of us are masters of. if life is hitting you hard and it seems like the world is against you this book is for you