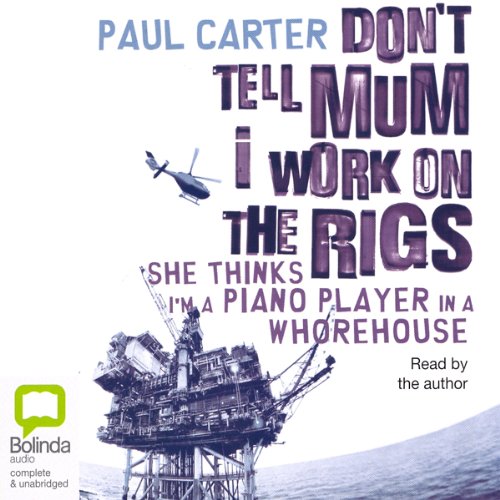 Don't Tell Mum I Work on the Rigs

Strap yourself in for an exhilarating, crazed, sometimes terrifying, usually bloody funny ride through one man's adventures in the oil trade.

A 'take no prisoners' approach to life has seen Paul Carter heading to some of the world's most remote, wild and dangerous places as a contractor in the oil business. Amazingly, he's survived (so far) to tell these stories from the edge of civilization, and reason. Taking postings in some of the world's wildest and most remote regions, not to mention some of the roughest oil rigs on the planet, Paul has worked, gotten into trouble and been given serious talkings to in locations as far-flung as the North Sea, Middle East, Borneo and Tunisia, as exotic as Sumatera, Vietnam and Thailand, and as flat out dangerous as Columbia, Nigeria and Russia, with some of the maddest, baddest and strangest people you could ever hope not to meet.

Carter is the man!

One of the funniest books I have read in ages. Was listening whilst driving in my car and at one stage literally had to pull over cause I was laughing so hard!

laugh until it hurt

Very funny book, really easy to listen too. I recommend. Worth taking the time to listen to this.

It got better towards the latter part. Some good descriptions of the industry culture and remote parts of the world. Also quite entertaining

Laughed so hard I wet myself!

The natural manner in telling the story. The stories themselves are GOLD!

What other book might you compare Don't Tell Mum I Work on the Rigs to and why?

What does the narrator bring to the story that you wouldn’t experience if you just read the book?

The author is the narrator so it really is like being at a party listening to his story!

Moved me to laughter, and a change of undies from wetting myself!

Just wish the book was longer

This book is hilarious. My mum had heard Paul Carter read exerpts of this book live and had said how good he was. I thought "yeah, yeah", but she was right. I had people looking at me strangely on the train because I kept laughing out loud. Not only is the book itself very well written with really funny with stories most people couldn't even make up, Paul is an excellent reader and puts on voices and accents to portray the characters and does this really well. Because he wrote it, he reads it with a familiarity that makes the story flow and sound like he's telling you his latest escapades over a beer. Seriously recommend this book.

Very intersting .I enjoyed it .

Would you listen to Don't Tell Mum I Work on the Rigs again? Why?

What other book might you compare Don't Tell Mum I Work on the Rigs to and why?

Hope he writeas some more .

Stories are loosely connected and, at times, you can lose the thread of the narration. Still, absolutely worth a listen!

If you could sum up Don't Tell Mum I Work on the Rigs in three words, what would they be?

It is a pitty that the author has to use the F word to add emphasis.

If you could sum up Don't Tell Mum I Work on the Rigs in three words, what would they be?

What was one of the most memorable moments of Don't Tell Mum I Work on the Rigs?

there were to many!

the monkey the adopted

this is brilliant book! I was laughing out loud so much that my husband think I was crazy!

He probably also did play piano in a Whore House,

Well he isn't telling everything is he? Regardless of some graphic accounts, a person just knows there is understatement. So I enjoyed Paul reading his own story. The voice tells you when a question could lead into another story. And some could not go into print.You know that too. And at times a real smile is in the voice.
And yes one does understand that a pet spider could indicate it is time to be evacuated, and enjoy the story of a monkey deliberately locking his friend in the loo. There is enough bloke chatter about bottoms and mishaps for a listener to draw their breath and then 'yes' laugh.
I liked the stories and the way they were told.

Don't tell mum I work on the rigs

Great book well worth the listen or read, fun personnel journey of a guy living his life on and around oil rigs... Thanks for making me laugh

Insightful view into a life on the rigs. Loved it.

Always considered that life, but definitely a young man's game and I'm not even 40 yet. Some mega stories...

A roller coaster ride through many countries. Some cringeworthy moments and lots of hilarious incidents.

Didn't like the way it was narrated. I like that Paul narrated it but it just felt like he was speaking fast and rushing it through the whole thing. But very enjoyable none the less.

Good for a laugh.

All the stories are either crazy or funny its a short read but glade i read it.

they were all good

I enjoyed voice of the author and narrator, Paul Carter. Stories from rigs are incredible and I felt that I was there too.

Hilarious adventures around the world

Paul recounts some incredible and hilarious adventures in this captivating book. I couldn't put it down nor could I stop myself fork laughing in public at some of the stories in this book - highly recommended.

Having the author as the narrator made the book for me. Really enjoyed it. Perfect.

I loved the book and played the audio with my hubby on a road trip. he loved it too. how do you make a tragic story almost comical. Well written and love audios narrated by authors

Couldnt finish it. Narrated so fast i was exhausted after the first chapter. No gaps in between sentences and the topics changed without a pause in breath. Very difficult to follow and not an enjoyable listen. Book was better.

The way Paul tells his autobiography is gold! He has me laughing out loud at his stories. Its a great listen and am looking forward to listening to his follow up book.

The whole book was disappointing

Poor use of time

That’s about 20 minutes of life I won’t get back .
Both books I have of his start with the same story

Really funny and interesting stories written by Paul. Some absolutely brutal others laugh out loud hilarious such varied and fascinating life on and off the rigs. Even if you’ve never worked on a rig which I haven’t this book is highly enjoyable.