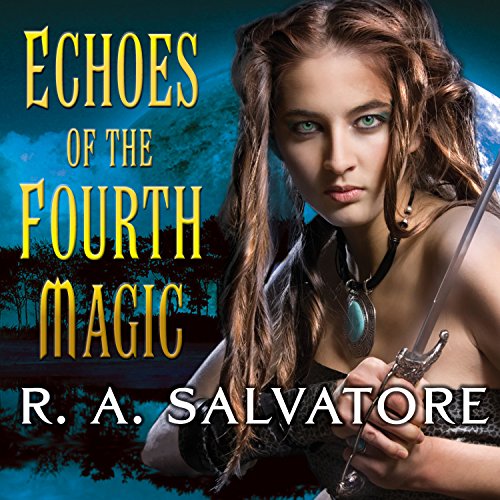 Jeff "Del" DelGuidice was proud of his assignment to the research submarine the Unicorn. But his mission had barely begun when the vessel was sucked into a mysterious undersea void where time stood still - before being propelled forward through the centuries. The crew surfaced in a strange, magical world changed forever by nuclear holocaust. Here a race of angelic beings had taken pity on the remnants of humankind, offering a chosen few a precious second chance.

Thus, the Isle of Hope was raised from the poisoned seas and set like a jewel in Earth's ravaged crown. But the jewel had a flaw, a dark vein of evil. For a sinister expert of the mystical arts had embraced the forbidden third magic, the most deadly sorcery of all. Only Del could defeat it - a hero sworn to peace and fated to wield the dazzling power of the fourth magic.

What listeners say about Echoes of the Fourth Magic

Good but not exceptional

This is a good book with a GREAT narrator. The story itself is interesting enough as Salvatore puts an atypical spin on fantasy book. There is part of me that liked the fact that the book did not follow the traditional path of the hero rising from nothing to defeat the warlock and save the damsel in distress. There is also part of me that wanted a bit more of the "WOW" factor however, I must applaud Salvatore for taking a step outside the box and not falling on his face. I was hoping for some sort of sequel but it looks as if this is stand alone story. As I said above. Good read but definitely not great.

Just not my cup of tea.

I love Salvatore and this is the first book in which I just couldn't get into. This may because I know him so well for Drizzt and his adventures. I think if you like alterative universe style books then you should enjoy this book. I do recommend Salvatore to Sci-Fi and Fantasy fans to try.

this is not a book for me was miss leading

What would have made Echoes of the Fourth Magic better?

I guess i was looking for a different type of story with the write up and title it was told nice but i don't like gore so much.

While in some ways I appriciated the non traditional view of fantasy. The story was predictable. The dialogue.....painfully dumb on the human side. The performance, hard to gauge maybe if he had better dialogue it would have been better. Hard to tell, maybe of course I'm not the target audience.

Echoes of the Fourth Magic

I tried to stay with this book, but got so bored that I didn't even finish it. I had trouble seeing modern men put in to this other realm, maybe it's just me, but it didn't work. From the very beginning I found the story boring, specially when you have a character like the sub captain that in reality would not have made it to that rank on that type of ship in the real world! The reader was very good and does well with different voices, but he couldn't make up for the snoozer of a story.

Good story line, well read, flowed nicely I enjoyed this immensely. Would recommend this to all ages.