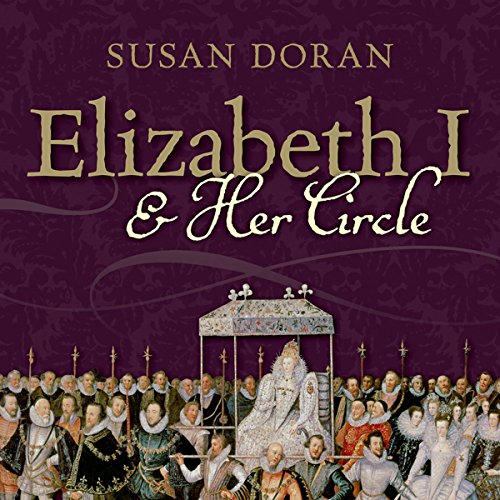 Elizabeth I and Her Circle

This is the story of Elizabeth I's inner circle and the crucial human relationships which lay at the heart of her personal and political life. Using a wide range of original sources - including private letters, portraits, verse, drama, and state papers - Susan Doran provides a vivid and often dramatic account of political life in Elizabethan England and the queen at its center. Doran offers a deeper insight into Elizabeth's emotional and political conduct, and challenges many of the popular myths that have grown up around her.

It is a story replete with fascinating questions. What was the true nature of Elizabeth's relationship with her father, Henry VIII - especially after his execution of her mother? How close was she to her half-brother Edward VI - and were relations with her half-sister Mary really as poisonous as is popularly assumed? And what of her relationship with her Stewart cousins, most famously with Mary Queen of Scots, executed on Elizabeth's orders in 1587, but also with Mary's son James VI of Scotland, later to succeed Elizabeth as her chosen successor?

Elizabeth's relations with her family were crucial, but just as crucial were her relations with her courtiers and her councilors. Here again, the story raises a host of fascinating questions. Was the queen really sexually jealous of her maids of honor? Did physically attractive male favorites dominate her court? What does her long and intimate relationship with the Earl of Leicester reveal about her character, personality, and attitude to marriage? What can the fall of Essex tell us about Elizabeth's political management in the final years of her reign? And what was the true nature of her personal and political relationship with influential and long-serving councilors such as the Cecils and Sir Francis Walsingham? And how did courtiers and councilors deal with their demanding royal mistress?

Not Much new Here for Tudor Afficiandos

I didn't learn much new from this book, but it was a good review of who was who and what went on at court. I especially liked the structure of the book. It is divided into three parts: Kin, Courtiers, and Councillors, and each section is divided into chapters focused on small groups or specific persons. "Kin" has chapter on Parents & Siblings, The Suffolk Cousins, Mary Queen of Scots, and James VI of Scotland (her eventual heir to the English throne). Three favorites are the chapter subjects of "Courtiers": Robert Dudley, Earl of Leicester; Sir Christopher Hatton; and Robert Devereux, Earl of Essex. The section has an additional chapter on the noblewomen who served as ladies in waiting to the queen. Part Three, "Councillors," includes chapters on William Cecil, Lord Burghley; Sir Francis Walsingham; and Burghley's son, Robert Cecil. In the course of the book, relationships between the various subjects and Elizabeth are analyzed and important events (the succession, Elizabeth's "marriage game," the Spanish Armada, the Dutch wars, religious dissent, etc.) are discussed in detail. In short, it's a nice primer or reference book on Elizabeth's reign.

The author takes a fresh look at this well studied chapter in English history. She focuses on the relationships of the various people within EI's sphere and tells each person's story through the prism of the relationship. It's a very interesting approach. She points out how a courtier had different boundaries than a Privy Councilman and argues that this forced them to use different tactics when trying to gain influence.

Unfortunately, organizing the book as sequential biographies leads to jumping around in time and main charachters from one chapter showing up as minor actors in another. This confusion is compounded by the English historical tendency for people to change names and titles several times during the course of their lives.

She jumps right into the people and events of the 16th century so you must have some familiarity with the Tudor period to avoid being overwhelmed by relations and namesakes.

I found it very enjoyable, if a little dry.

In an audible book, it is unnecessary - worse, it's a distraction - to have the reader recite "old English" phrases and then re-state the same word in modern English. This is fine for a printed book, where the difference in how the words are written may be of interest, but it doesn't work for an audible presentation and whomever produced this book should eliminate this type of thing in the future.

Elizabeth I and Her Circle

The narration of this audio book absolutely ruined the listening experience. I can't imagine why the author or publisher would sign off on Joanna Daniel's narration - it is so sing-songy (for lack of a better
description) throughout the entire book that I'm unable to listen to it for more than a couple of minutes. I was looking forward to this book as Elizabeth is an ancestor of mine. Will purchase printed version as book actually full of interesting information and I respect what was most likely a massive amount of research that Ms Doran spent on this work. However, due to it's presentation, it was a total waste of Audible choice; I will avoid any Audible books narrated by Ms Daniel; really horrible!

The cadences of Elizabethan writing are very much different from our writing today. The author includes many significant quotes from the sources upon which she bases her characterizations. The author included enough hints so we can understand the language of the times and the reader reads them well. It's a more sober assessment of Elizabeth's reign than the torrid love of the florid cougar, etc. Reality is always refreshing and I'm glad I was able to hear actual words from the time period.

What did you like most about Elizabeth I and Her Circle?

Interesting history, well written, but I think I will buy the hard copy as the narrator put me to sleep!

Elizabeth's Court explored through an extremely well researched examination of her relationship with her relatives, her courtiers and her ladies in waiting. This succeeds magnificently in giving the listener a sense of the real people behind the historical figures. Doran is a research fellow at Jesus College in Oxford and one of the things that really jumps out is the enormous number of letters and other written records that she has studied to build up a picture of the personality of Elizabeth herself as well as figures like spymaster Frances Walsingham, dashing favourite the Earl of Leicester and close female confidants who knew her from childhood like Kat Astley. At the same time the author shows enormous skill in keeping the reader engaged as she recounts Elizabeth's rise to power via close brushes with execution, the high stakes diplomatic efforts required to manage her relationship with cousin Mary Queen of Scots (whose claim to the English throne was stronger than Elizabeth's but for the twin obstacles of being catholic and a Scot with close ties to France); wars with the Spanish and finally the back stairs politics that increased in urgency as she neared death and her courtiers sought to safeguard the political stability of the realm by getting a successor who would command wide spread support.

This is a wholly satisfying listen; it offers wonderful insights how smart, hard working, swashbuckling characters took England from a European backwater to an international power while also showing us Elizabeth's private life through her relations with her closest female friends. It's gone straight back on for a second listen. The production quality and narration are also excellent. If you have any sort of an interest in this period of history, buy this audiobook.

This book takes a thematic approach to Elizabeth, but this leads to it jumping around and not covering many of the pertinent issues and events. As a history teacher myself I understand the need to present information in an interesting way, but, sadly, this falls well short of the mark. The relationships between Elizabeth and her court do not seem interesting enough to me to base a whole narrative around and it doesn't give the fascinating insight promised in the blurb.

The gangs all there!

Good facts and information. I'd definitely recommend it to historians and those who want to find out who a certain Elizabethan court character is.