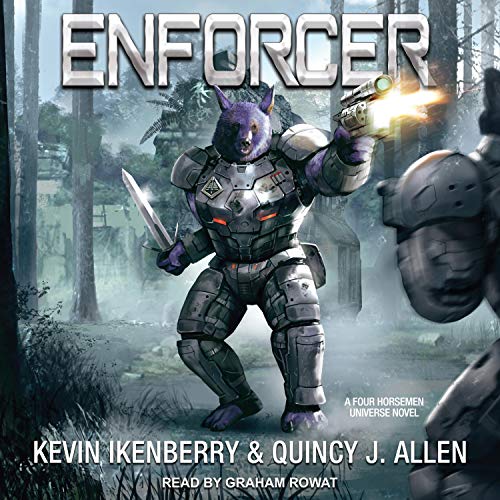 Peacemakers. The Galactic Union's most capable enforcers and resolute negotiators, their name alone elicits fear and awe among the Union's citizenry.

In the entire history of the Galactic Union, Hr'ent Golramm would be only the seventh member of the Oogar race to earn a Peacemaker badge. But becoming a Peacemaker doesn't seem to be his destiny. He's not even sure he wants to be one.

Deputy Selector Hak-Chet, on the other hand, has even bigger plans for the monstrous, young Oogar. At 500 kilos of raging, purple terror of questionable parentage, Hr'ent represents Hak-Chet's future for the Peacemaker Guild, but he needs a meat grinder into which he can drop his prospective prodigy in hopes that Hr'ent can come out the other side not only in once piece, but victorious over impossible odds.

Hak-Chet doesn't want a Peacemaker. He wants an Enforcer, and he's willing to cross just about every line to force Hr'ent into that mold. And when all is said and done, neither Hr'ent nor the war-torn world of Godannii 2 will ever be the same again.

What listeners say about Enforcer

Starts slow on the action. Excellent portrayal of Protagonists mental state. Action ratcheted up to 100 towards last quarter of the book. Narrator does awesome job.