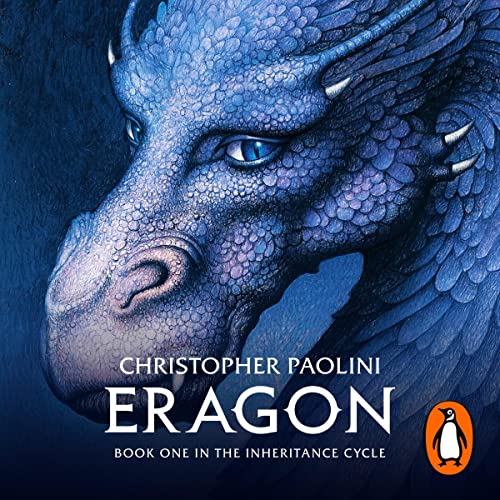 Gerrard Shale's reading turns this magnificent adventure into a thrilling audiobook for fans of all ages.

When Eragon finds a polished stone in the forest, he thinks it is the lucky discovery of a poor farm boy; perhaps it will buy his family meat for the winter. But when the stone brings a dragon hatchling, Eragon soon realises he has stumbled upon a legacy nearly as old as the Empire itself.

Overnight his simple life is shattered and he is thrust into a perilous new world of destiny, magic and power. With only an ancient sword and the advice of an old storyteller for guidance, Eragon and the fledgling dragon must navigate the dangerous terrain and dark enemies of an Empire ruled by a king whose evil knows no bounds. Can Eragon take up the mantle of the legendary Dragon Riders? The fate of the Empire may rest in his hands....

What listeners say about Eragon: The Inheritance Cycle, Book 1

So I'm aware people don't like the book because of obvious LOTR and Star Wars references. I'm aware this isn't a literary phenomenon which shook the world, but I enjoyed it then (in my teens) and I enjoyed it now.

It's got magic and elves and dragon. Now when I don't have the time to read fiction stories anymore, I really appreciate this audiobook. I'm going to finish the series now.

Coming back to the book, I enjoyed the fast paced story and the characters of Murtagh and Obi Wan, I mean Brom.

loved it.
story is engaging and so is voice.
I read once this novel half but surely enjoyed more in audio.

Inspired by those who came before.

Would you listen to Eragon - Part One again? Why?

I quite enjoyed the story and loved the narration by Gerrard Doyle.

Sooooo much better than the movie. A good start to what appears to be a great Fantasy series.

Which character – as performed by Gerrard Doyle – was your favorite?

Loved the portrayal of Brom, loved the character in the movie as portrayed by Jeremy Irons (a most underutilised actor) and it was great to see him fleshed out in the book and greatly portrayed by Gerrard.

The story and so many things in this book are obviously inspired by Tolkiens' works, but done with a obvious love of the original source and with just the right spin to make it his own world, an incredible feat for any author let alone a 16 year old novice (I believe that's how old Mr Paolini was when he finished Eragon).I look forward to sharing this book with my children as they grow older as it is a fine addition to anyone who loves Dragons and the bond they can have with their riders.

I wonder if Anne McCaffrey ever read Eragon?

The reading is a bit off

The dragons voice just doesn't suit. Unsure why the performer chose to make the voice sound like that

the narrator was awesome,the book was lovely although it took a long time to finish because I was always busy

One of the very best books I have ever read

it is the best book ever so wonderful. it stirs up emotions guide you to all the places eragon goes.

loved the show. The narrator is fantastic with pronunciations and his narration skills.
Cannot wait to listen to the next book.

Would you listen to Eragon - Part One again? Why?

Yes, this is an audio book I will listen to over and over again as well loved characters come to life. Gerrard Doyle has a beautiful voice and the life he instills in his characters makes thems so much more real - and there are quite a few.

I enjoyed how you share Eragons journey from simple farm boy to Dragon Rider and I love Saphira's development and the sense of humour and possessiveness she has for Eragon. The whole world that you are introduced to, the magic, elves, dwarfs, dragons and intrigues are thoroughly enjoyable.

This is one of my fav books.
The narrator is pretty good and the storyline is
"Brilliant"

Why split the book into two?

I enjoyed the book, but why split it into two? I have read plenty of books longer than this that are not split at a place where you have to buy the second half. Is this a money spinner audible?

Great start - shame they split the book in two !

Would you listen to Eragon: The Inheritance Cycle, Book 1 - Part 1 again? Why?

I think the story is engaging and it has elements that mean you could listen to it over and over.

There is already a film to this book which I have seen before getting the audio book and so far they are very different, but I am enjoying it.

I don't like the fact the books are split into two parts! There are longer books un-split!

Would be great to have a female voice for the dragon. but love it all the same. still great to listen to.

This book is amazing and if you like your fantasy adventure it will keep you listening.

Make sure you buy the combined book though not this which comes in two halves.

I really love this book. The story is told well but the voice used for the dragon is a bit obnoxious. It's all gurggly like someone who's smoked too much. I understand the perspective the narrator was going for and I can get over the annoying dragon voice because the story is just that wonderful. It's the kind of story you can really get wrapped up into and really makes you want to find out what happens next.

the voice for zafira was irritating to me, not sure why but lacked personality somewhat but that's the only downside I found everything else was fabulous.

Really great story, gripping and enjoyable. Shame that the voice of the dragon sounds more like a man than I think it should.

Love the series and the voices

eragon part one and two

Love the book can't wait to read the next book, its about a boy who finds an egg hard as stone that seemed to flash there in front of his eyes. He doesn't know its an egg and tries to sell it for food. One day it hatches into a dragon, he learns how to look after it, but an evil king wants it. The king kills his stepfather and burns down his home. An old dragon rider finds him and helps him to get away. He teaches him about riding magic and being a loyal dragon rider. Its great.

Hard to get through

Don't understand why a young female dragon would sound like the cookie monster...so much unnecessary dialogue but entertaining enough. Won't be listening to the next book if same narrator.

Hate the dragons voice and the dialogue feels forced at times but otherwise good story.

Great story, but why make a beautiful young magical creature sound like she has throat cancer?!?

I loved the story all through my youth, now listening to it ad an audio book every voice is done differently, there is little emotion and saphiras voice is dumb, as a mental voice there is no reason for it to be a rumble as though spoken through her throat. Struggled to finish the story and may struggle to continue with the series even reading from now on, do not recommend if you read this when younger and developed your own views of charavtwr

The voice of Saphira and the werecat should definitely be re-recorded. The rest is good... bordering on great, but please take the time to re- do those two voices. This story is great and deserves better. Saphira is supposed to be sophisticated and wise, with ancient knowledge, more than mere mortals can comprehend... and not to mention female! Please update this series, it could be listened to over and over if not for these two infuriating, and degrading voices.

I've read the book before but haven't had time to read it again, so I was excited to listen to the audio book whilst driving.

I wasn't a fan of the beastly voice that was given to the dragon. As a powerful and magical being, her voice sounded too brutish and unintelligent and frustrated me when hearing it.

The rest of the performance was great.

Eragon is a childhood favorite of mine. this is a good narration of the story, however I felt eragon was portrayed too whiney; asking questions to complain rather than out of curiosity. Saphira is also voiced with a deep growling voice, Which would be fine if she actually spoke the words. The dragons could be voiced with more nuance and personality if they sounded more like people.

A fantastic read or rather 'listen' although the dragon voice was a little unsettling. All together both the Author and Gerrard Doyle did a great job.

I enjoy this audio book. I have previously read the book and seen the movie and would have enjoyed it more if it was read more slowly. A more female voice for Saphira. over all quite good.

Never having been a fan of the fantasy genre I gave this book a try on the recommendation of my daughter who has read all three in the series and loved them. Well worth listening to and I will be listening to the other books.