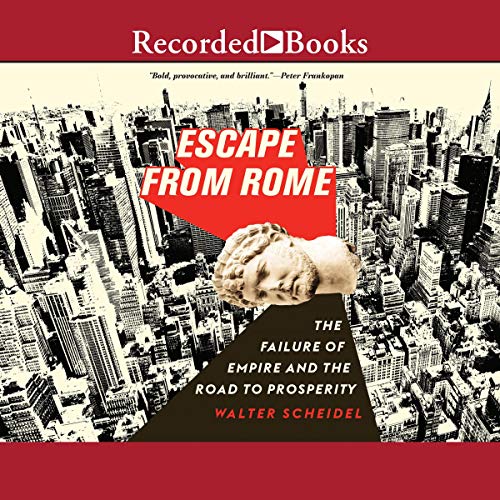 The fall of the Roman Empire has long been considered one of the greatest disasters in history. But in this groundbreaking book, Walter Scheidel argues that Rome's dramatic collapse was actually the best thing that ever happened, clearing the path for Europe's economic rise and the creation of the modern age. Ranging across the entire premodern world, Escape from Rome offers new answers to some of the biggest questions in history: Why did the Roman Empire appear? Why did nothing like it ever return to Europe? And, above all, why did Europeans come to dominate the world?

In an absorbing narrative that begins with ancient Rome but stretches far beyond it, from Byzantium to China and from Genghis Khan to Napoleon, Scheidel shows how the demise of Rome and the enduring failure of empire-building on European soil ensured competitive fragmentation between and within states. This rich diversity encouraged political, economic, scientific, and technological breakthroughs that allowed Europe to surge ahead while other parts of the world lagged behind, burdened as they were by traditional empires and predatory regimes that lived by conquest. It wasn't until Europe "escaped" from Rome that it launched an economic transformation that changed the continent and ultimately the world.

What has the Roman Empire ever done for us? Fall and go away.

What listeners say about Escape from Rome

The ideas in the book are super interesting if you like the long view of history. The narration however is impossible to listen to, with every. word. pronounced. individually. with. long. pauses. in...….... the. middle. of. sentences. The book should be re-recorded.

This is one of the best books I have listened to in a long time! I have read almost everything I can find on why "the West" reached modernity before the rest of the world. Scheidel approaches this question from a completely original angle. He also provides the best, most accessible overview of the current theories that I have found. Definitely one of my all-time favorite history books.

If this book isn’t read by a computer, I’ll eat my hat.

An absolutely fascinating book completely let down by the narration. The computerized narration made it absolutely impossible to follow the content.

The Most Disappointing Experience on Audible

I found the topic fascinating. I found the presentation pedantic and dry. May be that the book is really intended for a specialist reader rather than someone who is a more general audience. The performance was the absolute worst I have experienced on Audible aggravating the experience. I will never listen to another book with this narrator

Highly recommended for anyone who likes big history! It’s very clear that the author is knowledgeable and the book is well researched!

Too dry and detailed for non historians

This is an amazingly well researched book full of historical facts and valuable insights. However, the content is very dry and the style is humorless. It is a tough read and unless you are a historian you may find that it contains too much information.
Additionally, the audio is not engaging. The narrator’s tone is monotonous and at times it is hard to tell when he is calling out a chapter or just another sentence.

Is this read by a robot?

This review refers to the Audible version only, as I havent been able to get very far

There, are just, too, many, pauses, in the reading.

I am not talking as someone who has a thing for English grammar and correct diction, I Is this read by someone who has no idea of inflection, or by some sort of AI. I cant listen to it

How do I get my money back?

the narration of this book make it unlistanbale. stilted, computerised ear bleeding. the content is good.

Does the narrator truly know what he's saying?

The pauses the narrator made makes exactly no sense. It's as if someone is reciting the book without understanding a single sentence of its content. Scheidel's book however is an interesting one.

The book sounds like it’s either read by, or stitched by a machine. The voice is definitely human, but the pacing, pauses and inflections seem unnatural. As such, the audio experience is unnatural and very laborious to follow.

I have purchased the paper book, and it is a gem. This narration does a very poor job in making the book audible.