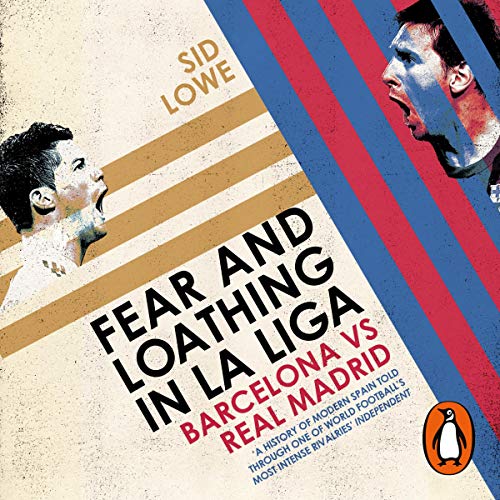 It’s Messi vs Ronaldo, it’s Catalonia vs Castilla. It’s the nation against the state, freedom fighters vs Franco’s fascists. It’s majestic goals and mesmerising skills, red cards and bench brawls. It’s the best two teams on the planet going face to face and toe to toe. It’s more than a game. It’s a war. It’s Barcelona vs Real Madrid.... Only, it’s not that simple.

From the wounds left by the civil war to the teams’ recent global domination, historian and expert on Spanish football, Sid Lowe lifts the lid on sport’s greatest rivalry. Lowe has spoken to the biggest names and the forgotten heroes who defined their clubs. Men like Alfredo Di Stéfano and Johan Cruyff as well as the only survivor of the most politically charged game in history, the Barcelona striker who knocked Madrid out of the European Cup for the first time ever, and the president who celebrated his club’s defining moment by taking a midnight dip in the Thames.

By exploring the history, politics, culture, economics, and language, while never forgetting the drama on the pitch, Lowe demonstrates the symbiotic nature of the relationship between these two football giants. In doing so he reveals the human story behind this explosive rivalry.

A wonderful and balanced history of both clubs

This book has really presented a great background to watching Classicos and Spanish football.

Great little personal vignettes that develop through the chapter with history and insight.

Sid Lowe is the perfect narrator. Great voice and the passion and knowledge comes through.

So much depth and detail. An absolute joy to learn of the history of Spain through this rivalry. Eagerly awaiting an updated version to include the years since this was recorded.

Always one of the most insightful of sports journalists when he appears on Guardian Football Weekly, this book is a delight, especially in audio form. An interesting blend of football and history, it does not offer a comprehensive story of either but will leave the reader/listener with an incredible insight into how the two intertwine.

Really recommend it! I didn't know a lot about the history of the El Classico, just the modern rivalry. This book informed what the precise wisdom is, but then the reality. Like Barca have not also grown Ballon d'ore winner's. And real were not always the big money spenders

I love the Football Weekly podcast, on which Sid Lowe frequently features to talk about Spanish football. Like many others, I follow the Premier League and have a vague awareness of what goes on in Spanish football through the Champions League, but no in-depth knowledge and don't follow it week-to-week.

I found the content of the book really interesting - the historical politics behind the scenes in Madrid and Barcelona, the Galacticos, Barcelona's revitalisation in the last few years. But... something I hadn't noticed about Sid Lowe when he speaks on podcasts is his inability to pronounce "th". It may not seem like much, but every time he says 1993 as "nineteen-ninety-free", Bethlehem as "Beff-lee-hem", and so on, it jars. The book would certainly lose something if someone else was narrating this book: clearly the guy knows Spanish football inside-out, and slipping back and forth between Spanish and English phrases when describing quotes etc is seamless, but this really did drive me mad by the end.

That said, for any football fan familiar with the English game and wanting to become a bit more knowledgable about the big two in Spain, I would still recommend this as well worth listening to.

Very interesting I enjoyed it

What does Sid Lowe bring to the story that you wouldn’t experience if you had only read the book?

I thought he was great and always good hearing author read

I enjoyed overall and found it very interesting

A well researched, well read and engaging book. Highly recommended for anyone who is interested in Spanish football. If you think you know about these two clubs think again. I did.

What does Sid Lowe bring to the story that you wouldn’t experience if you had only read the book?

He emphasizes on certain points that may be missing in the book. The fact it is narrated by the author comes across in the way he narrates the book

I haven't read the book yet, but since I signed up to audible and had the credits to purchase it I decided to do so. This book is a very interesting, comprehensive history of Real Madrid Vs Barcelona, covering their rivalry and also the history of each club, how they reacted to and dealt with the Spanish Civil War and other off-pitch issues, as well as the common flashpoints on the pitch, like Di Stefano's transfer, Mourinho, Figo and so on.I strongly recommend it to anyone who has an interest in either of these clubs or football generally.

Sid Lowe is a good writer in his various columns on Spanish football, and here he narrates his own book. This helps the audiobook emphasize key points - it feels like the audiobook is better because the author is narrating, rather than a narrator reading someone elses work.

What did you like most about Fear and Loathing in La Liga?

Not just for soccer fans.Well read and detailed account not just of the two clubs but of the recent social history of Spain told in terms of sport. Highly recommended for anyone interested in soccer and Spain in general.

This is the History of Real Madrid vs Barcelona

Would you consider the audio edition of Fear and Loathing in La Liga to be better than the print version?

Sid Lowe does a wonderful job narrating the history of both clubs.

The way the history is narrated and how the history of one impacts the other. How both teams became rivals and the best two teams in modern football.

His narration is brilliant and the way he tells the story is captivating.