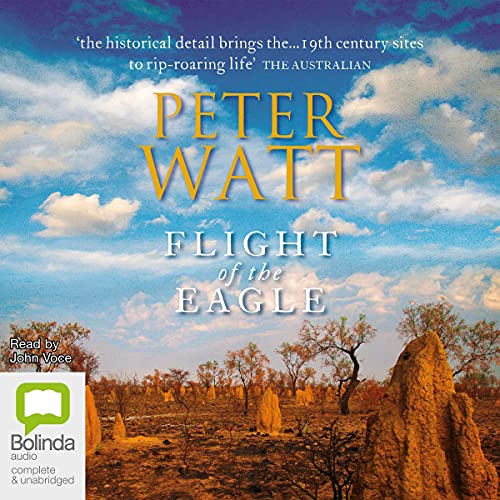 Flight of the Eagle

Flight of the Eagle is the third in the compelling Frontier series by best-selling author Peter Watt.

Captain Patrick Duffy's passions are inflamed by the mysterious Irishwoman Catherine Fitzgerald, further pitting him against his father, Michael Duffy, and his adoring but scheming grandmother, Lady Enid Macintosh.

On the rugged Queensland frontier, Native Mounted Police trooper Peter Duffy is torn between his loyal bond with Gordon James, the love of his sister, Sarah, and the blood of his mother's people, the Nerambura tribe.

Two men, the women who love them and a dreadful curse that still inextricably links the lives of the Macintoshes and the Duffys culminate in a stunning addition to the series featuring Cry of the Curlew and Shadow of the Osprey.

"The home-grown version of Wilbur Smith." (The Sunday Age)

What listeners say about Flight of the Eagle

It's a great story and the narration is good, unfortunately the quality of the recording is 2nd rate at best. It keeps stuttering and skipping as if your listening to an old cd

I loved this book. The author is incredibly talented, as too the narrator. Can't wait to hear the next book in the series!