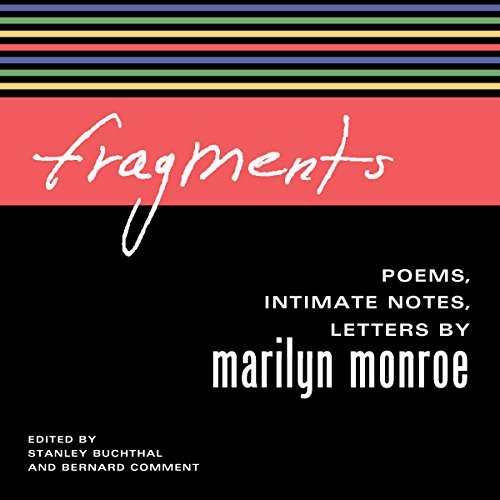 Fragments is an event - an unforgettable book that will redefine one of the greatest icons of the 20th century and that, nearly 50 years after her death, will definitively reveal Marilyn Monroe's humanity.

Marilyn's image is so universal that we can't help but believe we know all there is to know of her. Every word and gesture made headlines and garnered controversy. Her serious gifts as an actor were sometimes eclipsed by her notoriety - and by the way the camera fell helplessly in love with her.

Beyond the headlines - and the too-familiar stories of heartbreak and desolation - was a woman far more curious, searching, witty, and hopeful than the one the world got to know. Now, for the first time, listeners can meet the private Marilyn and understand her in a way we never have before. Fragments is an unprecedented collection of written artifacts - notes to herself, letters, even poems - in Marilyn's own handwriting, never before published, along with rarely seen intimate photos.

Jotted in notebooks, typed on paper, or written on hotel letterhead, these texts reveal a woman who loved deeply and strove to perfect her craft. They show a Marilyn Monroe unsparing in her analysis of her own life, but also playful, funny, and impossibly charming. The easy grace and deceptive lightness that made her performances indelible emerge in the chapters, as does the simmering tragedy that made her last appearances so affecting.

What listeners say about Fragments

I love her intimate voice and her each and she pleased my ears. Now it is my turn to please hers.

Soul touching! Scary - to know such dark secrets of such a bright human being!

it was easy to listen to and the narration was great sounding just like Marilyn. For people who don't know her story in great depth they probably won't understand some of the things she was saying but I know everything she was talking about.

in Her Own Words

Listening to this complete yet small collection of private thoughts written down by Marilyn herself reminds me in many ways of my mother who was also born in June. The turn of a phase. The psychological constant analysis of others and awareness of self. These notes give a glimpse into the Marilyn few understood.

I found this audiobook quite enlightening. I read everything I can on Marilyn Monroe and an effort to figure out what she was really like. This gives one great insight into her personality, her mindset, the complexity of her struggles and some of her daily life activities. I recommend it to those who study Marilyn Monroe and to those who simply enjoy her Legend.