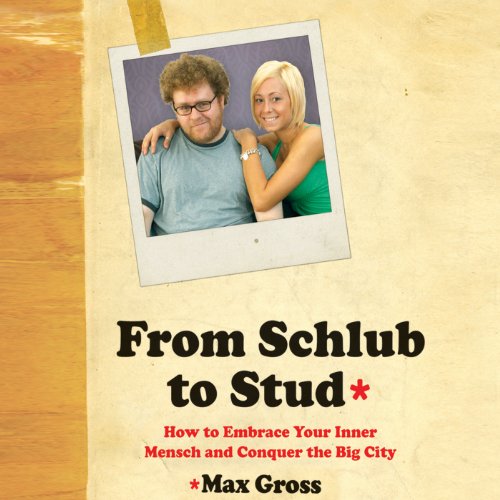 Memoir meets guidebook, Max Gross' From Schlub to Stud: How to Embrace Your Inner Mensch and Conquer the Big City is an endearing look at one man's quest to work what his mama gave him. After watching Seth Rogan in Knocked Up, Gross realizes his chubby, curly-haired, man-boobed self might be just what he needs to find true love. Patrick Lawlor's performance is pitch-perfect schlub. He nails accents and jokes alike. He is humorous, humble, and endearing. Just like Max Gross, this laugh-out-loud audiobook is a real winner.

Knocked Up revealed that schlubs really can become studs—here's how!

For years after college, Max Gross was a schlubby ne'er-do-well sporting an unwieldy Jewfro. He fought off double-chins and man-boobs. His style of dress was reminiscent of a stoned urban slacker. Young Max Gross truly was hapless in a big city. He was seemingly without luck or hope. He had bedbugs, a bad break-up, and an audit by the IRS that threatened to break his soul. But he had heart (as well as two nagging parents). When Gross saw the smash comedy Knocked Up, he realized his day might have arrived. All these years of being a world-class schlub would finally pay off. Thinking quickly, Gross wrote an article about the phenomenon and soon found true love.

In this hilarious memoir-cum-guidebook, our curly-headed hero shares his story and offers suggestions on leaving home (the bedbugs and consequent breakup forced a move back to his parents' loving arms), losing weight (but not too much), dressing well, playing poker to fulfill the typical schlub obsession with being good at sports, and much more. Naturally, the quest to find the right woman is of critical importance, and Gross expounds on this thoroughly. Listeners will come away from the book enlightened, informed, and laughing hysterically.

What listeners say about From Schlub to Stud