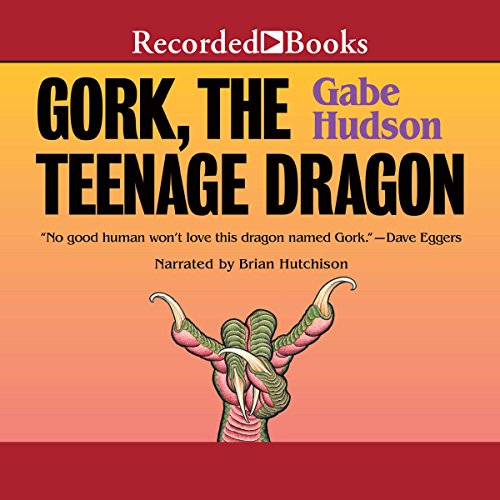 Fans of Harry Potter and The Hitchhiker's Guide to the Galaxy will relish this teenage dragon's spellbinding love story filled with bighearted humor and imagination.

Gork isn't like the other dragons at WarWings Military Academy. He has a gigantic heart, two-inch horns, and an occasional problem with fainting. His nickname is Weak Sauce, and his Will to Power ranking is Snacklicious - the lowest in his class. But he is determined not to let any of this hold him back as he embarks on the most important mission of his life: Tonight, on the eve of his high school graduation, he must ask a female dragon to be his queen. If she says yes, they'll go off to conquer a foreign planet together. If she says no, Gork becomes a slave.

Vying with Jocks, Nerds, Mutants, and Multi-Dimensioners to find his mate, Gork encounters an unforgettable cast of friends and foes, including Dr. Terrible, the mad scientist; Fribby, a robot dragon obsessed with death; and Metheldra, a healer specializing in acupuncture with swords. But finally it is Gork's biggest perceived weakness, his huge heart, that will guide him through his epic quest and help him reach his ultimate destination: planet Earth.

A love story, a fantasy, and a coming-of-age story, Gork, the Teenage Dragon is a wildly comic, beautifully imagined, and deeply heartfelt debut novel that shows us just how human a dragon can be.

What listeners say about Gork, the Teenage Dragon

I love this scaly ass Dragon!

Gork, the Teenage Dragon: A novel by Gabe Hudson had my &quot;scaly green ass&quot; laughing throughout the hilarious antics and witty dialogue in this book. Gork, our teen dragon, is called Weak Sauce because he is different than the other dragons. Only 2&quot; horns, faints, afraid of heights, and has an oversized heart, literally and figuratively. He is suppose to find a Queen before he graduates the academy for dragons or he has to be a slave. If he finds a Queen that will except him, he gets to go with his Queen to a planet and start a new life. He has deal with bullies, nerds, mutants, and robot dragons. It is a comical, witty, tender, coming of age story with magical and delightful fantasy and just a hint of romance. Humor sprinkled generously!!! I giggled so much reading this book. There are so many scenes and phrases that caught me off guard that had me laughing and snorting. What a gem of a book! Thanks NetGalley, I haven't enjoyed a book like this in such a long time!
The narrator is good but it would have been funnier to have a younger, funnier narrator.

I didn't enjoy this book. The writing style is offputting and repetative, the story is predictable, and the characters have very development. On a posative note, there are a lot of entertaining ideas. It seems like the author had a good idea for a universe that could use some more development. Then he slapped together some tropes and cliches, bound it together with bad puns, and plopped some underdeveloped characters into it. I only finished it because was curious how it ended, and I'm not sure it was worth it. The narrator did the best he could with what he had.

I definatly loved the point of view as a male teenage dragon. That was a very cute first person perspective and the authors choice of slang was smile inducing oh let's not lie I chuckled a lot. While for me parts of the story fell kind of flat or overly ham fisted I really wanted to know what the prophecy about Gork was so I just had to listen to find out. overall a cute read I would recommend.