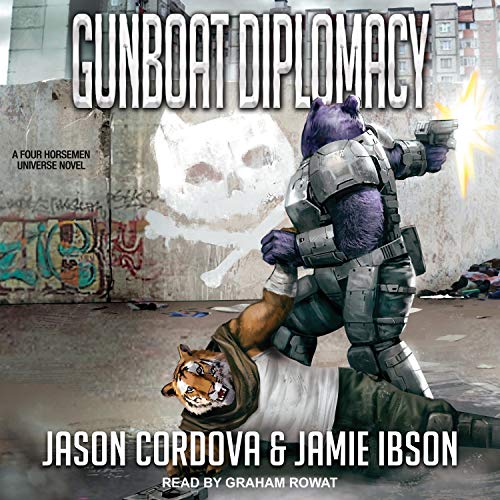 Before Hr'ent Golramm became a legendary Enforcer for the Peacemaker Guild, he was a mere candidate. Granted, he was a particularly unusual candidate - only six Oogar had ever successfully graduated from the Peacemaker Academy on Ocono, and Hr'ent would be the seventh. Every candidate must pass a commissioning mission in order to graduate, though, and Hr'ent's is unsolvable.

The Pushtal of Vorrhurna were once one of the Mercenary Guild's 37 races. After a series of disastrous contracts, the tiger-like aliens lost their status as mercenaries, and the MinSha seized their home world for defaulting on their debt. Eighty years later, the seven Great Clans are but a shadow of their former selves and have resorted to piracy to survive.

For his commissioning mission, Hr'ent and a small team of bounty hunters must find a way to put a stop to their predations. No one in the Union has figured out how to herd cats to this point, but Hr'ent is a particularly unusual Peacemaker candidate, who isn't afraid to resort to a bit of gunboat diplomacy to get the Pushtal to listen to what he says, once and for all.

What listeners say about Gunboat Diplomacy

I love the 4 Horseman books and snatch them up as soon as they are available... but this time was a mistake. The narrator is TERRIBLE! 10 minutes into the book I gave up. The nasal out of breath reading was more than I could take. I might buy the book to read and to see if the story was worthwhile, but nothing again from this narrator.

no inflection from the story teller monotonous bor

I'm usually not a big fan of sci-fi space books, and I decided to change things up a bit. I'm not disappointed, this was a pretty decent book.