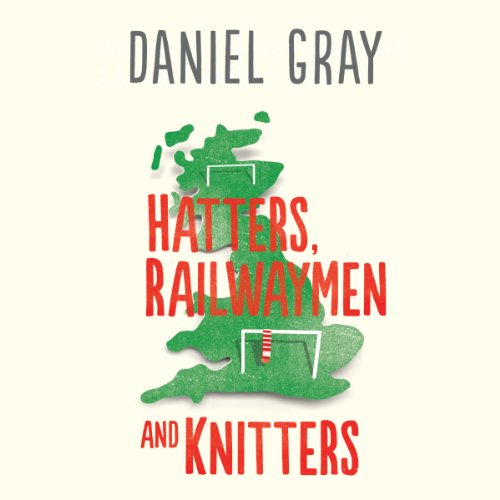 Daniel Gray is about to turn 30. Like any sane person, his response is to travel to Luton, Crewe, and Hinckley. After a decade's exile in Scotland, he sets out to reacquaint himself with England via what he considers its greatest asset: soccer. Watching teams from the Championship (or Division Two, as any right-minded person calls it) to the South West Peninsula Premier, and aimlessly walking around towns from Carlisle to Newquay, Gray paints a curious landscape forgotten by many. He discovers how the provinces made the England we know, from Teesside's role in the Empire to Luton's in our mongrel DNA. Moments in the histories of his teams come together to form soccer's narrative, starting with Sheffield pioneers and ending with fan ownership at Chester, and Gray shows how the modern game unifies an England in flux and dominates the places in which it is played.

Hatters, Railwaymen, and Knitters is a wry and affectionate ramble through the wonderful towns and teams that make the country and capture its very essence. It is part soccer book, part travelogue, and part love letter to the bits of England that often get forgotten, celebrated here in all their blessed eccentricity.

If you really love real football

A temendous journey through the soul of football, a nostalgic look back at English football as it was and the part football played in society , and moreso the part the towns, cities and areas palyed in the development of clubs and their identities. Thers a yearning for the magic thats been lost to the modernisation of the game, If only we could undo how the games been hijacked by the desire to make money rather than to represent a community.
A greatlisten, I was emotional whilst listening sad when it ended.

Not just a football book!

I picked this book as I am a big football fan and spend a lot of time watching the lower leagues so the appeal football aspect of the book. This did not disappoint, but delivered on so many more fronts and has so much more to offer.

I found it a gripping insight into how the different areas of the country changed over the years and how football played a part in this. What was even more surprising is that my other half also listened and was gripped by it and she follow football, instead taking the history and the travel from this and loving the story of England within this book.

The only "downside" to this (and it's not really a downside) is that the author is early 30's however, the narrator sounds like he's a little older so sometimes it feels that there is a disconnect between the authors intended image and what is given by the narrator. Having said that, this is no reason to not listen and is probably less of an issue than not having Fergie reading his book!

This book reminded me of what I love about football. Being of a similar age as the author I found his quest to relive and revive his youth and his Englishness through the back waters of English football clubs an extremely uplifting journey. The author, living in exile in Scotland and wants to rediscover his Englishness and English football and does so by travelling around the country taking in games from some of the less fashionable towns and cities.

If you listen to only one Trevelog-history-football-book this year let it be this one!

The author expertly navigates not only the history of the clubs but also the history of towns while passing comment on what are like today. This book is interesting, informative and funny throughout and I would recommend it to anyone that grew up watching football in the late 70’s 80’s and to the modern-day watchers for a view on how the game has changed over the years. This book is very well written with a dry wit that will keep you interested from start to finish and as if to prove this I devoured the audio book in just four sittings.

Last year I made a similar journey to the authors but on a smaller time scale and in reverse. I am an exile in England and spend a week in November 2012 visiting old Scottish 1st 2nd and 3 division grounds that I went to as a kid, saw 3 games and soaked in the atmosphere along the way. The book has also inspired me to visit more football grounds around the country on my travels and I have made plans to do so next month.

Fed up with The Premiership League? Get this now!

Great journey around the grounds of grass routes football. Very well written and a fascinating listen, interesting take on how the various towns and cities visited show you how the social make up has changed of the UK...
Attention to detail was excellent and the authors characters are brought to life by great narration.
I really enjoyed this listen and was able to put it down and pick it up and get straight back into the journey quickly...a must for all football lovers.

A good read for any football fan of any club with love for the game in the societies it is part of .

A good read, funny in places with some thoughtful social and historic commentary. Most football fans of certain divisions will relate to stories of travelling away to the likes of Crewe and Luton! Well worth a read.