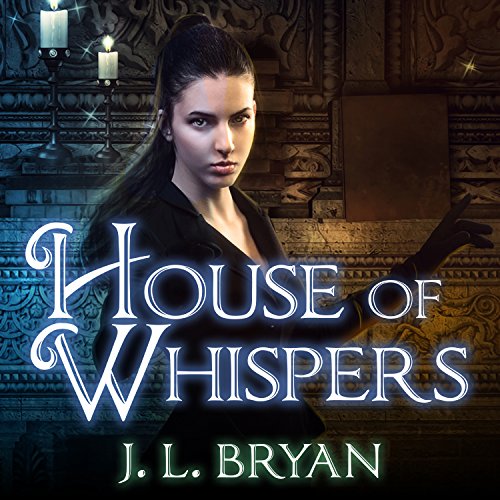 The luxurious Lathrop Grand Hotel is a Savannah institution that has entertained guests for more than a century and a half, offering some of the finest accommodations in the city. Famously haunted, the hotel draws tourists from around the world eager to encounter its numerous ghosts. The hotel is also known for being honeycombed with hidden doors and secret passages, enabling staff to appear and disappear quickly as they attend to the hotel's guests.

Now some of the spirits in the Lathrop Grand have turned violent, even murderous. Ellie and Stacey must determine which ghost has become dangerous and remove it from the hotel before it can claim any more lives. They soon learn the hotel has secrets even darker than the notorious string of 19th-century murders that made it famous, and the powerful entities inhabiting it don't intend to leave without a fight.

What listeners say about House of Whispers

I enjoy these spooky popcorn horror books that the author puts out. But I'm not a big fan of the main character. She's too cool and counter culture for pop music, or hobbies, or joy (referring to a joke in the book). The author barely conceals the main character's condescending views of everything her coworker likes...pop music, dressing up to go to nice dinners, getting excited about things, not being a cooler-than-though person all the time...when did it become such a crime for girls to like to look nice? I don't know why so many authors now write female characters like they're allergic to anything more complicated than jeans and chapstick...yet they always get the hottest guys in town. The main character just reeks of a "not like other girls" girl.

Also, the coworker is freaking smart and gets no love. She handles all the technology and is also super brave, but the author and main character remind us every 5 minutes how ditzy she is. Wish the author knew it's possible to wear makeup, listen to pop music, like pretty dresses, *and* be a total badass.

Anyway this is overall a great book, you should get it. The ending had me super intrigued and wanting to read the next one.

love the series. keeps you in suspense and mystery. easy to follow the story can't wait til the next book

Think again before you stay in a heritage Hotel

What twists and turns I would really like to hear more of J L Bryan's books. Carla Mercer meyer is my new favourite narrator.
It gives you the chills

I purchased the series it was worth it. This book and reader made you feel in the moment of the events. Can't wait for next one!!! Please don't make me wait long. I told couple of my co-workers about the books and even they got hooked.

I like the two female leads in the book. The stories are spooky, with a side of snark.

House of Whispers
Ellie Jordan, Ghost Trapper Series #5
By: J. L. Bryan
Narrated by: Carla Mercer-Meyer
I love this series! Ellie and Stacy go to a posh hotel to get rid of the murderous ghosts that are stopping the construction on the fourth floor. The one famous ghost that is being accused is not the only ghost they find but a whole town full of ghosts! None are happy! Good story with suspense and humor!
Wonderful narration! She is awesome!

J L Byran does it again

Bryan is a great writer. I love the characters and the world he has created. I hate having to wait another year for the next book.

very disappointed as have enjoyed all the other books in the series but couldn't even finosh this one.

Better, but not great.

This story was better than the previous one, but it still wasn't great. I'm getting really tired of the main character constantly whining about things. If you don't want to work with the people taking over the company, quit! If not, stop complaining about it. It's all very childish and annoying. The narrator is good. In fact she's probably the reason I actually got to the end of the story. Think I would have given up if I was reading it.