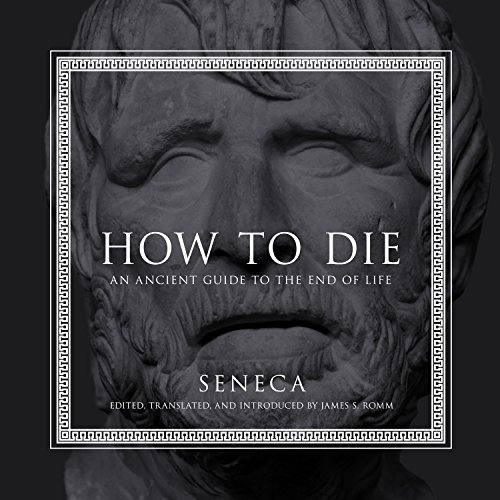 "It takes an entire lifetime to learn how to die", wrote the Roman Stoic philosopher Seneca (c. 4 BC-65 AD). He counseled readers to "study death always", and took his own advice, returning to the subject again and again in all his writings, yet he never treated it in a complete work. How to Die gathers in one volume, for the first time, Seneca's remarkable meditations on death and dying. Edited and translated by James S. Romm, How to Die reveals a provocative thinker and dazzling writer who speaks with a startling frankness about the need to accept death or even, under certain conditions, to seek it out.

Seneca believed that life is only a journey toward death and that one must rehearse for death throughout life. Here, he tells us how to practice for death, how to die well, and how to understand the role of a good death in a good life. He stresses the universality of death, its importance as life's final rite of passage, and its ability to liberate us from pain, slavery, or political oppression.

What listeners say about How to Die

The reading is somewhat flat.

His voice can be somewhat dull and boring at times, however it was still a good purchase.

The speaker’s voice sounded robotic and mispronounced the name of Seneca’s compatriots. Maybe I am wrong but I don’t think Marcia is pronounced “Mark-ia” or Lucilius as “Lu-kill-ius”.

This will be one of the best uses of 2:30 in human history! Must read!

The narrator speaks like Google's TTS, ruined it for me. Also, as the audio book lacks the Latin it is consequently very brief. Having been reading and rereading Seneca for years I know that he had an awful lot more to say about death and suicide which has been omitted from this book. Also, his tradegies are not included which included some great lines, such as "Greedy for life is he, who refuses to die, along with the dying world". Why couldn't these quotes and many like them been added to an appendix? Romm is a great translator, and his book 'Dying Every Day: Seneca in the court of Nero' is fantastic. Just a shame he hasn't included more passages from Seneca in this book. The hardcover might be good for those who are new to Seneca and just want a taste of Seneca's views on death and suicide, but not really suitable for seasoned readers of Seneca. This audiobook was really let down by the narration though, irritating at times.

Most clear intonation, although full of nuances. A true classic, both in content and execution.

Not as good as I hoped it would be. Mostly just tales and stories but nothing outstanding. The voice is too robotic.

Seneca has interesting ideas presented, but they don't hold up in a contemporary fashion. When Seneca presents an argument, they are obviously very thought out, and very empirical. However, where I feel he is lacking is where he doesn't represent the lower classes of Roman society very well (and therefore could correlate with our own class divide in the 21st century). Another thing omitted or possibly unconsidered is that to a contemporary understanding, daily living makes it very difficult to happily accept a fulfilled life. Seneca doesn't tell us how to change these things, but rather, why.