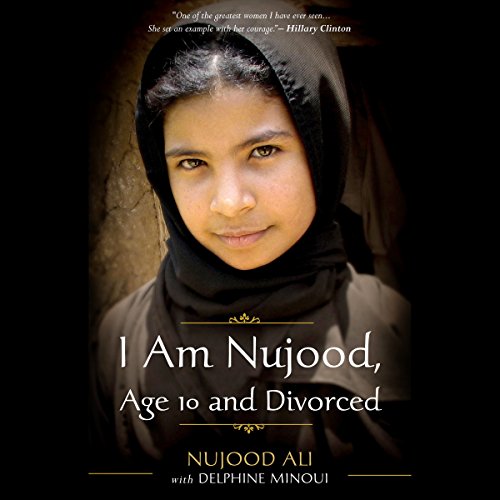 I Am Nujood, Age 10 and Divorced

Forced by her father to marry a man three times her age, young Nujood Ali was sent away from her parents and beloved sisters and made to live with her husband and his family in an isolated village in rural Yemen. There she suffered daily from physical and emotional abuse by her mother-in-law and nightly at the rough hands of her spouse. Flouting his oath to wait to have sexual relations with Nujood until she was no longer a child, he took her virginity on their wedding night. She was only 10 years old.

Unable to endure the pain and distress any longer, Nujood fled, not for home, but to the courthouse of the capital, paying for a taxi ride with a few precious coins of bread money. When a renowned Yemeni lawyer heard about the young victim, she took on Nujood's case and fought the archaic system in a country where almost half the girls are married while still under the legal age. Since their unprecedented victory in April 2008, Nujood's courageous defiance of both Yemeni customs and her own family has attracted a storm of international attention. Her story even incited change in Yemen and other Middle Eastern countries, where underage marriage laws are being increasingly enforced and other child brides have been granted divorces.

Recently honored alongside Hillary Clinton and Condoleezza Rice as one of Glamour magazine's women of the year, Nujood now tells her full story for the first time. As she guides us from the magical, fragrant streets of the Old City of Sanaa to the cement-block slums and rural villages of this ancient land, her unflinching look at an injustice suffered by all too many girls around the world is at once shocking, inspiring, and utterly unforgettable.

Although there are some things I would have elaborated on, this book is amazing. For someone of her talents she needs to continue to prod the world to see things through her eyes.

However, life is harder in some parts of the world than others. When local tribal customs advise men to marry 9 year old girls.... something is wrong with that culture. Yemen isn't the only country in that region to marry off pre-pubescent girls and, clearly, there are educated people in the capital who are trying to change this.

Nujood is a child with a lot of courage and her story was a good window into the culture and living conditions in her country.

What did you love best about I Am Nujood, Age 10 and Divorced?

The fantastic story of this little girl and her courage.

What was one of the most memorable moments of I Am Nujood, Age 10 and Divorced?

The first evening in her new housbands family.

What does Meera Simhan bring to the story that you wouldn’t experience if you just read the book?

Everything. Her voice could not be more right for this book.

It's no surprise that such a disguesting practice is being done as often as does the simple act of sleep and wake. But to hear first hand how the males view women like cattle and how the women not only have learned to conform for their own protection and sanity, but some have even grown to encourage such behavoirs. This story of the trials of a ten year old little girl who was forced into voilence and sickness is heartbreaking yet uplifting. A true underdog story that although is often gutrenching must be told & read. I pray for you little brave Nujood.

An obviously disturbing story told in the usual matter of fact fashion with which these books are usually rendered. It does wander off into familial and cultural tangents a lot for a book so short. A distressing through not overly engaging tale.

After listening to Nujood's story, I did further research. She is still under the thumb of a father who continues to marry off his child daughters.

Short but worth it

For just a few hours I was wondering how this would be. But I listened to it in one streght. I was shocking and eye opening. Some of your money goes to help support this young lady in this purchase, plus you get a audio book. I learned something new, got an audio and helped support Nujood. It was worth the few dollars for me.

was OK.... perf. of reading distracting

took a long time to make the point. performance of reading distracting and hard to follow at times.

Very informational, it proves the point that “you” have to fight for your own life. I’m glad her story was seen by millions. I pray that more is done regarding this practice world wide.

This story is a painful but crucial portrayal of the plight of many women and children in the Middle East. May we all be inspired to remember and protect these humans whose unheard voices dream of a decent and hopeful life.

I found it totally engrossing .

What an amazing story,her strength of character helped her to overcome everything .So pleased she managed to escape and helped others .Pity more couldnt of been done to her 'husband' as he broke the law and should of been punished and her father for doing it .Have recommended to friends on facebook .I truly hope she successfully becomes a lawyer.

An amazing true story told by a little girl who had to grow up too fast. She found the inner strength to fight against an impossible situation and she dared to break away from the rules that bound her. A very brave young lady who we could all learn so much from.