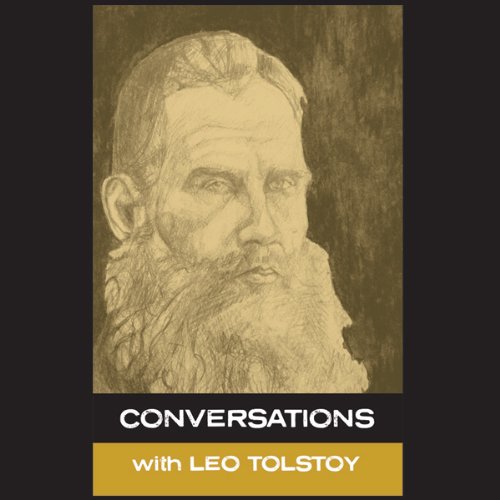 In His Own Words: Conversations with Leo Tolstoy

When most think of Tolstoy, they think of the great author. War and Peace and Anna Karenina brought him worldwide fame, and a good deal of money. Had he done nothing else in life, these two novels would have ensured him status and respect. Few others had written both a national epic and a great love story; and some might have been content with that.

For his last 30 years, however, Tolstoy walked a different track. After his spiritual crisis, when he was 50, he exchanged his author’s clothes for those of a prophet – a prophet who was to have a great influence on Gandhi, amongst others. Through his prolific writing, he now became the scourge of the rich, the Church, and the Government. Neither did he miss an opportunity to denounce both science and art. Darwin? Dostoyevsky? Shakespeare? No one was to be left standing.

In Conversations with Leo Tolstoy, Simon Parke grants us the honour of sitting with the great man, towards the end of his life, and gives us the chance to chat with him. The conversation is imagined, but not Tolstoy’s answers. This is Tolstoy is his own words, drawn from his extensive books, essays, and letters, and the military, vegetarianism, marriage, non-violence, death, God, and sex are all on the agenda. ‘I want people to come away feeling they know Tolstoy,’ says Simon Parke, who was keen to use only Tolstoy’s authentic words. ‘They will be become aware of his opinions certainly, for he was forthright in those. He had an opinion on everything! But I hope also that people leave with a sense of the man beneath the opinions. I don’t always agree with him; but it is hard not to admire him. He was far from perfect, but as he says: just because he walks the road like a drunk, doesn’t mean it’s the wrong road.’

What listeners say about In His Own Words: Conversations with Leo Tolstoy

The idea of presenting a dialogue with the famous man based around his writings on the various points is great. It makes an understanding of the most important views of Tolstoy easily accessible. Questions about his life let us see if his implementation of his own philosophy was achieved.
His strikingly unconventional views on Shakespeare do him no favours.

What a character - non-vilent anarchist, ascetic Buddhist/Christian who was longing for a denial of 'self'. Captivating! And his opinion on Shakespeare, you have to hear it! Andy Harrison and Simon Parke did a phenomenal job, it sounds like you are in the room with Tolstoy. Highly recommended.