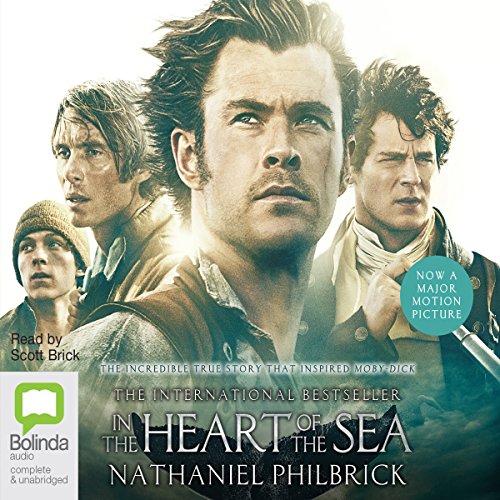 In the Heart of the Sea

The number-one best-selling, epic true-life story of one of the most notorious maritime disasters of the 19th century - now a major motion picture starring Chris Hemsworth.

The sinking of the whaleship Essex by an enraged spermwhale in the Pacific in November 1820 set in motion one of the most dramatic sea stories of all time: the 20 sailors who survived the wreck took to three small boats (one of which was again attacked by a whale), and only eight of them survived their subsequent 90-day ordeal, after resorting to cannibalising their mates.

Three months after the Essex was broken up, the whaleship Dauphin, cruising off the coast of South America, spotted a small boat in the open ocean. As they pulled alongside they saw piles of bones in the bottom of the boat, at least two skeletons’ worth, with two survivors - almost skeletons themselves - sucking the marrow from the bones of their dead shipmates.

"Utterly gripping." ( Daily Telegraph)
"As gripping as it is grissly...a cracking narrative, a complex cast of characters and a terrible moral dilemma at its heart." ( Daily Mail)

Hope was all that stood between them and death


“No matter how much the inhabitants might try to hide it, there was a savagery about this island, a bloodlust and pride that bound every mother, father, and child in a clannish commitment to the hunt.”
― Nathaniel Philbrick, In the Heart of the Sea

This is a harrowing tale that is the opposite of Life of PI, this is about raw survival, a description of a primitive desperate reality of the physical needs of the body and social expectation battling it out in the most horrible of circumstances. Morals and feeling eroded to the point where madness is the last refuge.

“After seventeen days, one of the crew suggested that they cast lots. As it turned out, the lot fell to the man who had originally made the proposal, and after lots were cast again to see who should execute him, he was killed and eaten.”
― Nathaniel Philbrick, In the Heart of the Sea

The writer submerges us in the period and customs of this bloody trade, living no bone unturned, no secret unexamined, all tales ground and pounded into dust, the descriptions and examples presented are as unrelenting as the hunt this men executed on their prey, the whales on the other hand are described, in all their social beauty, and dissected in the commercial value and business practices of the period.

“The whaleman’s rule of thumb was that, before diving, a whale blew once for each minute it would spend underwater. Whalemen also knew that while underwater the whale continued at the same speed and in the same direction as it had been traveling before the dive. Thus, an experienced whaleman could calculate with remarkable precision where a submerged whale was likely to reappear.”
― Nathaniel Philbrick, In the Heart of the Sea

I read this book in two sittings, it was interesting, absorbing and fast paced with some of the most disturbing information about humanity or the inhumanity of humans towards other species and ourselves.

This is one of the best historical books I have read, detailed and informative, while presenting a story that encompasses the horror of tragedy and the very real lives of the men that survived the ordeal, and unusually describing what happened after the rescue, till the very end of their lives. The book also examines the literary influences this event had on American writers from Poe to melville being the two most directly affected in their writing.

I loved this book for the most part but the last couple of hours really drag on once the main part is over.

Also worth a read