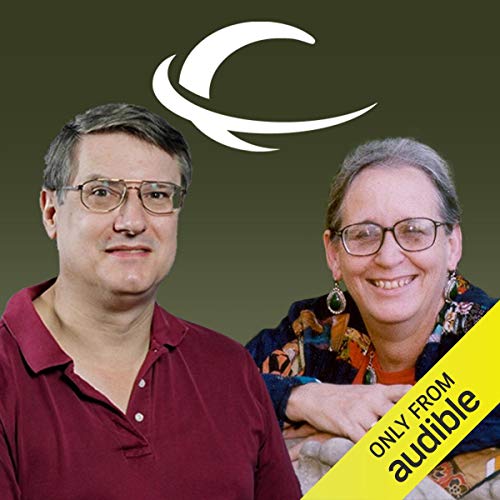 Authors Jack Campbell and Elizabeth Moon discuss fact vs. fiction in science fiction and fantasy; reviving old series and bringing new series to an end; steampunk; and much more.

Jack Campbell is the pen name of John G. Hemry, author of the best-selling military sci-fi series “The Lost Fleet”, as well as the “Stark’s War” and “JAG in Space” books. Hemry is a retired U.S. Navy officer.

Elizabeth Moon is a former U.S. Marine whose many books include the Nebula Award-winning novel The Speed of Dark, the “Paksenarrion” fantasy series, and the “Vatta’s War” military sci-fi series.

What listeners say about Jack Campbell and Elizabeth Moon: A Conversation

An Interview with Campbell & Moon

This is a short (17 min) interview with Jack Campbell and Elizabeth Moon. I have listened to Campbell Lost Fleet series and am now listening to JAG in Space and have enjoyed them. So I was interested in hearing more about him and his writing. I had never heard of Elizabeth Moon is was intrigued by her. Apparently she was in the U.S. Marines and writes fantasy as well as military Sci Fi. She discuss the various series she writes I was interested in Vatta's War a military Sci Fi and will see if Audible has it. I did not learn a great deal about them as the interview was too short but they did discuss about how they go about writing and how the characters changed from their original ideas. This is worth the listen and it is free.

It felt like an ad for the new books, not like a true discussion of their art.

Was Jack Campbell and Elizabeth Moon: A Conversation worth the listening time?

This is rather dated now - having been recorded around the Dreadnought release and the return to the Pax universe for Moon. Felt like two strangers thrown in a room trying desperately to say something interesting to get your to buy their newest book and yet be courteous to the other.

This interview went nowhere. Not woth listening to. Neither of these writers had anything interesting to say. Zzzzzzz......

What did you love best about Jack Campbell and Elizabeth Moon: A Conversation?

They sounded relaxed and as if they were enjoying their discussion.
I liked how they found common ground in hearing real stories in life around them.
Is truth really stranger than fiction?
I smiled when they talked about "suggestions" or ideas readers have sent to them.

It made me chuckle. The few times I have seen it done before do tend to stick with the audience.

Have you listened to any of Jack Campbell and Elizabeth Moon ’s other performances before? How does this one compare?

While I have read some of Elizabeth's work, this is the first audible I have listened to from either author.

A very interesting discussion about what goes into creating times and places that are not 100% based in reality.

Interesting conversation if a little out of date! However, still worth listening to. The most interesting insights discussed was not about their books but about Steam Punk and how the Steam Punk "look" can be traced back to Disney's 20,000 Leagues.

If you like either of the authors have a listen to then having a chat. While I wish it was longer it still makes for an engaging listen