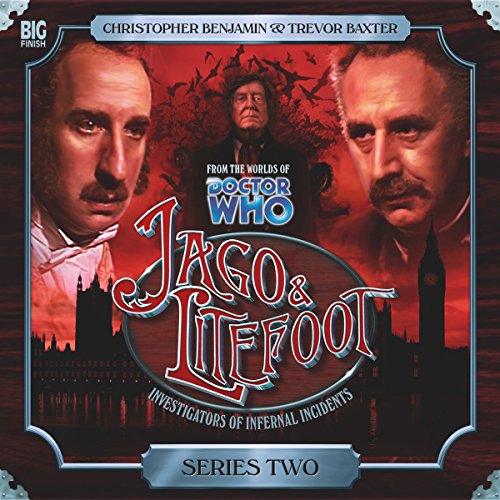 The continuing adventure of Henry Gordon Jago and George Litefoot, characters first introduced on television in Doctor Who: The Talons of Weng-Chiang (1977), who have become Infernal Investigators, solving mysteries involving paranormal or alien phenomena in 1880s London. This release features four full-cast audio dramas plus a behind-the-scenes documentary:

More adventures with the Victorian investigators

I loved it. This second series is a great continuation of the Jago and Litefoot story!

Thoroughly enjoyable. The amazing cast completely drag you into a good story. Sound design is excellent.

a journey with in itself.

I love it. I wish their were more books like this one. I love the performance and was able to pay attention.

Jago and Litefoot another great series

I really enjoyed Series 2 of Jago and Litefoot can't wait to listen to Series 3. Nice surprise at the end.

These are Great Stories.

Jago and Litefoot are off again on new escapades concerning anything uncanny and creepy in Victorian London. The two unusual friends have formed a close friendly relationship after their encounter with Doctor Who and his companion Leela. They now have a taste for investigating macabre and uncanny mysteries.

A joy to listen to

I absolutely loved this! I was only going to listen to one episode a day but I found I couldn't stop. The scripts are excellent and the performances spot on - not only Christopher Benjamin and Trevor Baxter but all the other performers as well. Their voices are a joy to listen to and I found myself totally caught up in the world of Jago & Litefoot. I can't wait to start the next series.

loved this story, exciting and gripping all the way.
The performances were smashing in recreating this period piece.

Initially sceptical about listening to Doctor Who spin-offs it took me a while to venture into this series. However, having heard series one I immediately downloaded series two and enjoyed it enormously on my commute to and from work.
Series three now downloaded and about to commence.
Excellent work.

Yup, and I have done. Henry Gordon Jago and Professor Litefoot are two characters I have to share.

Series two of their adventures, Jago and Litefoot are just excellent. Even if classic Doctor Who is not your thing, the chemistry between these characters is simply too good to miss.

Would you listen to Jago & Litefoot Series 2 again? Why?

Terrific! I got into Jago and Lifefoot from Doctor Who, but it is both seperate and distinct enough to attract the uninitiated and in my opinion is possibly better from the series it is spun off from. Jago and Lifefoot is just a ripping yarn with some rollicking good and atmospheric stories and two lead characters that are a pleasure to listen to. Would listen again.

great stories that are performed wonderfully .
Can't wait to get the next one .