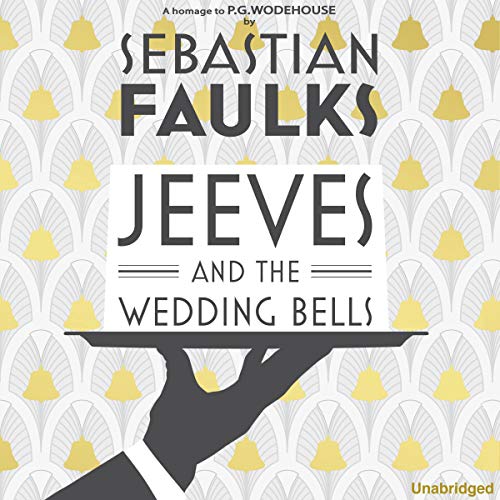 Bertie Wooster, recently returned from a very pleasurable soujourn in Cannes, finds himself at the stately home of Sir Henry Hackwood in Dorset. Bertie is more than familiar with the country house set-up: he is a veteran of the cocktail hour and, thanks to Jeeves, his gentleman's personal gentleman, is never less than immaculately dressed. On this occasion, however, it is Jeeves who is to be seen in the drawing room while Bertie finds himself below stairs - and he doesn't care for it at all.

Love, as so often, is at the root of the confusion. Bertie, you see, has met Georgiana on the Côte d'Azur. And though she is clever and he has a reputation for foolish engagements, it looks as though this could be the real thing. However, Georgiana is the ward of Sir Henry Hackwood and, in order to maintain his beloved Melbury Hall, the impoverished Sir Henry has struck a deal that would see Georgiana becoming Mrs Rupert Venables. Meanwhile, Peregrine ‘Woody' Beeching, one of Bertie's oldest chums, is desperate to regain the trust of his fiancée Amelia, Sir Henry's tennis-mad daughter. But why would this necessitate Bertie having to pass himself off as a servant when he has never so much as made a cup of tea?

Could it be that the ever-loyal, Spinoza-loving Jeeves has an ulterior motive? Evoking the sunlit days of a time gone by, Jeeves and the Wedding Bells is a delightfully witty story of mistaken identity, a midsummer village festival, a cricket match and love triumphant.

What listeners say about Jeeves and the Wedding Bells

Where does Jeeves and the Wedding Bells rank among all the audiobooks you’ve listened to so far?

An excellent story in true Wodehousian fashion. Well 'contrived' and predictable but nonetheless as with all the genre very enjoyable anda stellar effort by Mr Faulks to re-create one of fictions greatest comedy writers.

Well worth the listen and an excellent rendition of style and , period, character and story.

The author has done an excellent job of capturing the tone and rhythm of Woodhouse great humour.. superbly read :-)

We approached this book with some trepidation as we are avid Wodehouse fans. The introduction by the author and his explanation of what he had hoped to achieve when asked to write the book reassured us, and after listening to it we feel he fully achieved his aims. Sebastian Faulks has managed to conjure up all the charm and humour of Wodehouse himself and provided us with another fantastic Jeeves story with a very satisfying conclusion. The narration was superb.

If you have ever liked PG - get this.

What did you like most about Jeeves and the Wedding Bells?

It made me laugh out loud and smile continuously throughout. I have read the Jeeves books about 10-15 times each. This is like finding an old friend you haven't seen for 20 years.

True to PG without being slavish; a resolution that even the most hard hearted would find touching.

What does Julian Rhind-Tutt bring to the story that you wouldn’t experience if you had only read the book?

Just buy it. Complete no brainer.

This book had me laughing out loud. What an extraordinarily clever book and perfect delivery. I am astonished that someone I normally associate with spy/thriller stories could produce such a faithful sequel to the original PG's work. I cannot praise too highly this delightful frivolity which tiptoes in the footsteps of the originals. I do hope there will be more to come; I can't wait. Thank you both for creating this lovely silliness, perfect reading - should I say acting - of a wonderful piece of writing. I live in Canada and was telling friends about Jeeves and Wooster today only to discover they had never heard of them. I immediately brought them up to date on the essential gist and I needed no shotgun to hand to force them to buy the entire oeuvre so they could dance through the complete history and finally arrive at this crowning glory. I did though, envy them their imminent joy on discovering PG for the first time. I doubt that, lacking the benefit of a British education however, Magnum Parva will elicit the giggle it gave me. The old Latin "O" level finally paid off, what?

Would you consider the audio edition of Jeeves and the Wedding Bells to be better than the print version?

Possibly. I haven't read the print version but Julian Rhind Tutt did a good job.

What other book might you compare Jeeves and the Wedding Bells to, and why?

Any of the original Jeeves books - all the usual plot-lines were there.

Which character – as performed by Julian Rhind-Tutt – was your favourite?

Sir Henry Hackwood - captured his pomposity perfectly. I'm used to Martin Jarvis's performances of Wodehouse so it took me a while to get used to this narrator but I've liked his narration form other audible titles so it wasn't a problem.

There were plenty of occasions where it made me laugh - particularly the cricket match and the village fete towards the end.

An extremely difficult task to follow in P G Wodehouse's footsteps but Mr Faulks did a good job. A nice authentic story where I could lose myself in times gone by and be reacquainted with my old friends Jeeves and Bertie W. My only criticisms were that I thought Jeeves overdid his intellectual quotations (I know he's brainy but there's no need to over-stress the point). Also, I found the ending rather unlikely, considering all that has happened before with the main characters in the original stories. But overall, a valiant attempt at recreating Bertie, who got into all his usual customary scrapes, and convincing narration too. Will never beat the wit, humour and magic of the pen of P G Wodehouse, but that's no criticism of this author.

Absolutely, what's the word, tip of my...

Oh yes, that's it, marvellous! Nicely done Mr Faulks. Good zippy plot, plenty of twists and turns, and the Jeeves machinations to bring things to a "most satisfactory" conclusion were brilliantly thought out.

I was unsure at first about the narration, and this was my second attempt at listening to it. However after an hour or so, either the narrator settled into their role, or I got used to it. An altogether enjoyable version of Jeeves and Wooster. Not quite woodhouse in places, but close enough to sit beside them. well done Faulks.

What did you like most about Jeeves and the Wedding Bells?

The story zips along and to me at least was very true to PGW's style and wit. The scrapes that BW immediately involves himself in and their resolutions are excellent.

The true-to-the-originals story arc and the touching end.

What does Julian Rhind-Tutt bring to the story that you wouldn’t experience if you had only read the book?

Jeeves and the Wedding Bells

This was better than I could have possibly hoped. It isn't a perfect imitation of Wodehouse--Jeeves is a bit too much of a caricature, for a start, and the end is far more sentimental than in the originals--but this is certainly a book that could not have been written by anyone who did not absolutely love the characters. Due homage is paid to the Jeeves & Wooster friendship, and admittedly Faulks spells it out instead of letting the plot speak for itself the way Wodehouse did, but I actually quite liked that--it seemed respectful. The determination, as well, for everyone to have a happy ending--it wasn't Wodehouse, but I don't think it was trying to be; instead, it was quite a self-aware way of trying to honour his legacy. Loved it. Will probably buy the book as well, so I can read it again. Also, spot-on narration. It always seems weird for anyone other than Hugh Laurie to play Bertie, but in fact the narrator did a splendid job.

This was a very good attempt at a Jeeves & Wooster story. The Wodehousian expressions were excellent and had me laughing out loud on several occasions. Julia Rhind-Tutt does a reasonable job of narrating, but cannot compare to Hugh Laurie in my view. My main criticism is that it was w-a-y too long. The storyline, as with most J&W stories, was ludicrous and, while this is very much in the Wodehouse style, it became rather tedious...