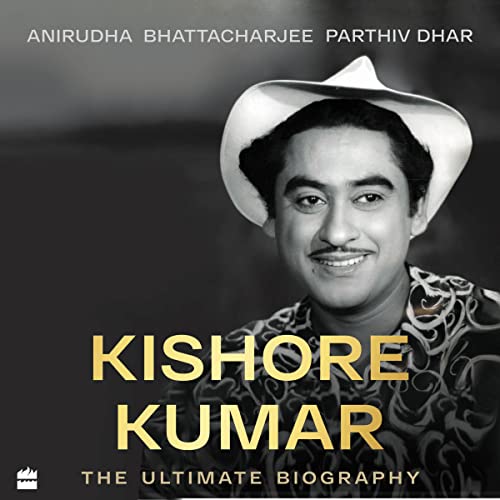 He was the most outrageous performer of the Hindi film screen—loved for his voice, adored for his comedy, and famous for his eccentricity. His big-screen performances—such as Half Ticket, Pyar Kiye Jaa, Padosan—could make you laugh hard, but his songs—like 'Koi humdum na raha', 'Badi sooni sooni hai', 'Ghungroo ki tarah'—could make you cry.

This is the story of the voice of a generation, the legend—Kishore Kumar. Beginning with his time spent in Khandwa, Bhagalpur and Indore and going on to Bombay where Kishore moved to try his luck in cinema, this new biography by Parthiv Dhar and Anirudha Bhattacharjee tells it all. A product of over thirty years of research, it goes beyond Kishore's nearly three thousand songs and his varied contributions to cinema, and reveals unknown facts about his four marriages, his run-ins with the government in the 1970s, and his health issues.

Kishore Kumar: The Ultimate Biography celebrates the music, the films and the genius of Kishore in the most definitive way for a new generation of audiences.

What listeners say about Kishore Kumar

Labor of love, but the story gets lost in details

This book is clearly a labor of love for the authors, and their extensive research and attention to detail are evident throughout the book. However, at times, the wealth of information can be overwhelming and distract from the central narrative of Kishore's journey. While the specific dates and background of each family member may be interesting at first, they eventually become tedious and detract from the emotional depth of the story. As a result, the book becomes more of a collection of facts than a captivating tale. In comparison to biographies by authors such as Walter Isaacson and David McColough, this book could benefit from a more cohesive and engaging narrative. I also found the numbering and structure of the chapters confusing. Perhaps my not being familiar with Ragas didn't help either.

As for the audio version, the narration by Riya is a highlight of the book. She handles the English passages and Hindi/Bengali references to songs with ease and obviously has no issues with pronunciation. At times, the reading may come across as a bit dry, but this could also be a result of the overwhelming details mentioned earlier. Overall, the audio version is worth a listen for fans of Riya's podcasts and anyone interested in learning more about the legend, Kishore Kumar