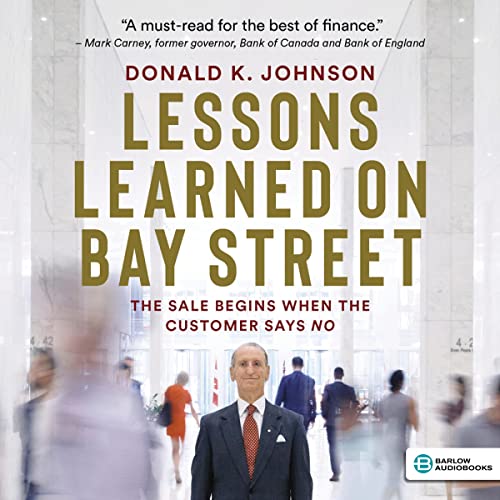 In this memoir, one of the most successful investment bankers on Bay Street shares the lessons he learned about business and life in a long and successful career as president of Burns Fry and then as vice-chairman of BMO Nesbitt Burns.

Lessons Learned on Bay Street tells the inside story of how Donald K. Johnson led financing transactions involving hundreds of millions of dollars for Canadian and international corporations, deals that involved some of the biggest financial players in the world, such as Warren Buffet. Johnson shows how he applied that deal-making ability to raise millions for charities. And he illustrates his motto, “the sale begins when the customer says no,” with a tale about how he convinced the government to remove the capital gains tax on donations of listed securities.

As a longtime practitioner of meditation, Johnson urges listeners to choose a career they love, and to keep mentally and physically fit on the way up. This book, from an 85-year-old financial wizard born in Lundar, Manitoba, offers sage advice and a big dose of inspiration to listeners seeking success in finance, in other businesses, and in life.

What listeners say about Lessons Learned on Bay Street