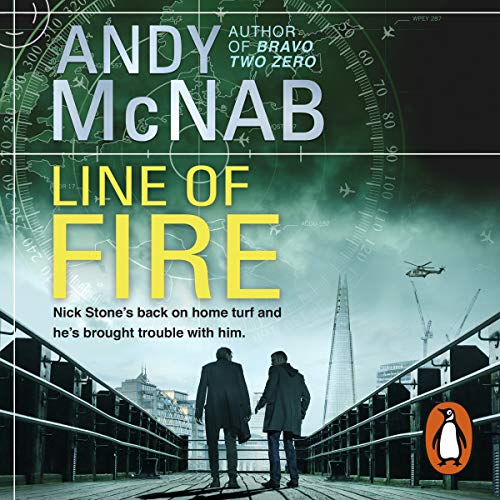 Nick Stone is back in London, but if he thought he was home for a break, he's very, very wrong.

Backed into a corner by a man he knows he cannot trust, ex-deniable operator Nick Stone strikes a devil's bargain. In exchange for his own safety - a life for a life - Stone is charged with locating someone who doesn't want to be found, currently hiding out in the one of the remotest corners of the UK. And for the first time in a long time, he's not operating alone.

But Stone and his team don't find just anyone. They find a world-class hacker, so good that her work might threaten the stability of the Western world as we know it. These are dangerous waters, and Stone is quickly in over his head. Before he finally knows which way to turn, the choice is ripped out of his hands.

Most people might think of home as safety, but Nick Stone isn't most people. For him and his team, it's just another place to get caught in the line of fire....

What listeners say about Line of Fire

Andy McNab is on top of his game !!

Andy McNab is a fantastic story teller he uses his experiences to bring the story to life. I have all of the Nick Stone books, this is right up there with the best.

it's a good listen

Like a lot of his later work, not so detailed but a good yarm nonetheless, still luv Nick Stone

best one of the series

This is my favourite book of the 19, so sad that it is also the last..

I have read or listened to all the Nick Stone series and I enjoyed this one a lot. I would follow the locations on google maps as the story moved along. Very good characters and some good twists. Superb narrator who gets the voices and attitudes spot on.

Stone is hard as nails

He's flawed but he's tough. Nick Stone certainly hasn't lost his touch in another entertaining Andy Mcnab thriller, I can see why Mcnab was raked among the top 10 writers of all time.

Wherever you are listening to this book, you're guaranteed to be hooked from start to finish.

last 2 books seemed to be irrelevant

the story seemed to just peter out, really enjoyed this character but the last 2 books seemed to be totally out of ideas and no mention of any of the loss of his wife and child. it was well acted by the narrator but it will be a shame if this is how his character is ended.

Good to see Nick Stone evolve into the SMS

missed a few books and coming back to Nick Stone was loke meeting an old mate and oickung up where we left off.

a brilliant book had me literally tensed up at times and couldn't put it down.
got tve lrevious three books to catch up on

Another great journey, rather than a climatic end, good follow up from last book. looking forward to next.

Another great Nick Stone book by Mcnab, but the naration is exceptional and really sets this book apart.

Much better than the previous book!

I think that if you've made it to book 19 you should have a good idea of where the story will be heading and generally what to expect... This book continues Nick and his mate’s story, touching on modern day global issues both technical and personal and at a nice pace. (Keeping it vague so there’s no spoilers hope that makes some sense?)

I managed to listen to the book in a day and a half without noticing where the time had gone, with the normal top-notch narration by Paul Thornley.