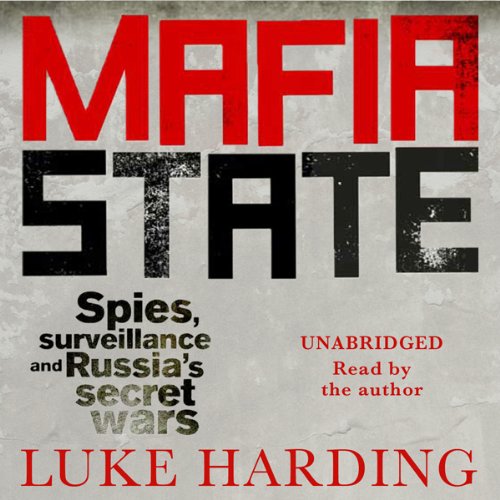 In 2007 Luke Harding arrived in Moscow to take up a new job as a correspondent for the British newspaper the Guardian. Within months, mysterious agents from Russia's Federal Security Service - the successor to the KGB - had broken into his flat. He found himself tailed by men in cheap leather jackets, bugged, and even summoned to Lefortovo, the KGB's notorious prison. The break-in was the beginning of an extraordinary psychological war against the journalist and his family. Vladimir Putin's spies used tactics developed by the KGB and perfected in the 1970s by the Stasi, East Germany's sinister secret police. This clandestine campaign burst into the open in 2011 when the Kremlin expelled Harding from Moscow - the first western reporter to be deported from Russia since the days of the Cold War.

Mafia State: How one reporter became an enemy of the brutal new Russia is a brilliant and haunting account of the insidious methods used by a resurgent Kremlin against its so-called "enemies" - human rights workers, western diplomats, journalists and opposition activists. It includes unpublished material from confidential US diplomatic cables, released last year by WikiLeaks, which describe Russia as a "virtual mafia state". Harding gives a unique, personal and compelling portrait of today's Russia, two decades after the end of communism, that sounds like a spy thriller.

“The author, an award-winning foreign correspondent with the Guardian, worked in Moscow from 2007 to 2011, and was the first reporter to be kicked out of Russia since the end of the Cold War. This fascinating book charts his experiences… what makes this book come alive and read more like a thriller is the thread of personal intimidation that Harding and his family endured during their stay.” ( Oxford Times)
"Mafia State is a probing, sobering view of a powerful – and dysfunctional – nation." ( Financial Times)
"What is different about Mafia State is the personal and family history at its core. Instead of attempting a conventional sketch of Kremlin politics, Harding focuses on the harassment he encountered in Russia - and the result is a gripping tale…. his enthralling denunciation, written as autobiography, is as informative as anything Malcolm Muggeridge produced.." (Robert Service, TLS March 16th)

I really enjoyed this book. I thought that Luke's refreshing honesty and comprehensive review of his years in Moscow were wonderful - and it was fascinating to read of the tough time he and his family had.

Personally, I felt that the book could have been edited a little better - with explanations in the latter part of the book often referring to things that we had already been introduced to. I also felt that some of the "field trips" (for want of a better word) in the middle of the book were extremely similar to articles that I had read in the Guardian during Luke's time in Moscow.

Nonetheless a great read by one of the very few truly principled western reporters to have served in Russia in recent years.

awful reading with interesting content but can't listen to his he reads it. trying to return it but audible doesn't make it easy

Interesting story with strangely disjointed rendition. A professional reader would have done a better job.

Contents are worth a listen but Luke Harding doesn’t seem a natural narrator, which was a slight problem. You should still download it though.

I loved this book for its content. That the reading of it was stuttering and robotic merely highlights the book's interest and intrigue: I suffered it to the end.

it's an interesting book, which delivers a bleak picture of today's Russia. Harding gives a good delivery but I really really wish he didn't pronounce nuclear as nookular...