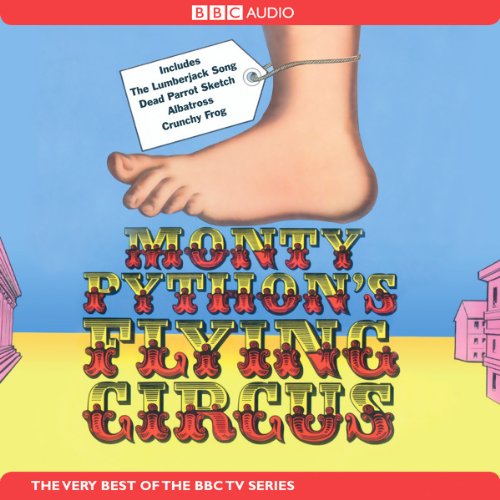 A selection of sketches from Monty Python's Flying Circus..

Perhaps the ultimate in TV comedy madness and absurdity, this cult series, which began in 1969, was conceived, written, and performed by Graham Chapman, Eric Idle, Michael Palin, Terry Gilliam, and Terry Jones. Its innovative and ground-breaking comedy inspired many of today's writers and performers. This audio programme features many of the legendary sketches, songs, and catchphrases, including "The Dead Parrot", "The Ministry of Silly Walks", "The Lumberjack Song", "And Now for Something Completely Different", and many more.

Ever wondered why fans can't resist quoting lines from Monty Python skits? They cackle something absurd and then break into fits of laughter leaving the uninitiated clueless?

I had this recording on a cassette tape when I was a kid. I played it so often it became stretched and unplayable. Today I was reunited with a recording that is a Monty Python classic. The Flying Circus is a great place to plug into the absurd, mind bending British humour and be introduced to their whacky world perspective.

Before you know it you will be cackling absurd lines and laughing out loud before you finish leaving others wondering what's going on. They really do 'shine out like a shaft of gold while all around is dark'.

Where does Monty Python's Flying Circus rank among all the audiobooks you???ve listened to so far?

Not an audiobook. This is classic Python sketch comedy!

What other book might you compare Monty Python's Flying Circus to and why?

There is no comparison

Have you listened to any of the narrator???s other performances before? How does this one compare?

Love this collection of Python sketches

As a long time fan of the Monty Python troupe, I've always appreciated their witty shtick based humor. This audio book helps me while forward deployed to Afghanistan and my only regret is that there are no other MP audio books with just the skits and not documentaries.

Monty Python is awesome, but this isn’t the best recording

The sketches included are good ones, but they aren’t the best recorded versions. If you’ve never heard Monty Python, I don’t suggest starting with this version.

Incredibly funny and I found this to be developmental and maturative for a young man coming of age such as myself. I further highly recommend this book.

Great performance and I love the voices of what john clacse and Erick idle. I’m a huge fan I love the philosopher song and fish slapping dance

Pretty sure I had this album as a kid.... it's only about an hour long, but to me it was worth the credit

Maybe not for audio…

I love the Pythons, and it’s good to hear all of their best Flying Circus sketches, but there’s something lost without the video. The Dead Parrot sketch is still funny, but without seeing John Cleese screaming at the dead bird to try to wake it… well, it’s not quite the same. If you can’t get enough of them, try their autobiographies and other books on Audible instead.

Great, but no chapters.

A great CD is ruined as the formatting is messed up on this audiobook - there are just two chapters - the first 15 seconds, and the remaining 53 minutes. Want to jump ahead to a particular sketch, move the slider around and hope.

Classic, but, several are missing

Wish it was longer with other sketches. Has some I'm familiar with, real classics, though.

That is it. Just cut the audio from one of the shows and ask money for it.
Still a little funny but i think the best part was lost.

Great to listen to these original sketches. a lot of these are different. Great listening.

It was good to take s trip down memory lane, zany and funny well recommended.

😄Hallarous-
Unfortunately only has a few of the many, many skits there was originally.
Stupidly funny!

here lies why so many English of a certain age have a sense of humour, can laugh at themselves and are courageous with what they say. Pity Python along with Private Eye aren't central to English education...