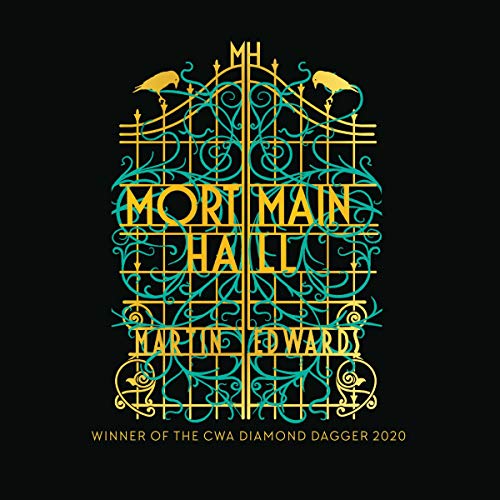 'You died once...Tell me who arranged your resurrection, or before the day's out, you'll be dead and gone forever.'

1930. A chilling encounter on London's Necropolis Railway leads to murder. At the Old Bailey, a man accused of a 'blazing car' killing escapes the gallows after a surprise witness gives sensational evidence. And journalist Jacob Flint finds himself framed for murder. To save himself, Jacob needs to discover what links these strange events to a remote estate on a northern coast, Mortmain Hall.

At Mortmain Hall, an eccentric female criminologist hosts a gathering of people who have narrowly escaped the consequences of miscarriages of justice. But the house party culminates in tragedy when a body is found beneath the crumbling cliffs. Is the death an accident or the result of an ingenious plot to get away with murder?

An eclectic mix of suspects and victims includes a radical publisher risen from the grave, a fake medium with a sinister past and a cricketer mauled to death by an escaped lion. Jacob sets out to uncover the labyrinthine secrets of Mortmain Hall, alongside a woman whose relentless quest for the truth might just bring down the British establishment.... Who can we turn to, if justice betrays us?

"Superb a pitch-perfect blend of Golden Age charm and sinister modern suspense, with a main character to die for. This is the book Edwards was born to write." (Lee Child)

What listeners say about Mortmain Hall

Worthy of All Rewards

Mr. Edwards proves his work is worthy of all the literary awards (CWA Diamond Dagger,etc.) and accolades he has received. He cleverly weaves together characters, plot, and place to create a fabulous piece of noir detection. I especially enjoyed his attention to the psychological development of the characters and the subversive Machiavellian undertones of the plot. Read this book when you’re in the mood for something layered and nuanced. It can be read as a stand alone, but I suggest reading “Gallows Court” first to appreciate the progression and pacing of the series. I quite enjoyed the narrator also. I’ll be happy to read Mr. Edwards’ next venture.

Starts off promising but there's loads of build up and setting before the whole thing is unwound in one quick chapter at the end.

This just flopped for me

Having much enjoyed and appreciated Martin Edwards' introductions to a number of re-discovered older detective stories, I was greatly looking forward to something he had written himself, especially in light of so many positive reviews. Alas, for me it simply did not work. I found none of the characters interesting or engaging, and the plot line lurched from one bizarre situation to another. I simply couldn't get interested in either the characters or the story. I persevered for about six hours, and then, since I found myself quite indifferent to what happened for the next four hours, I gave up. Perhaps this is just me, but I really found it hugely disappointing.