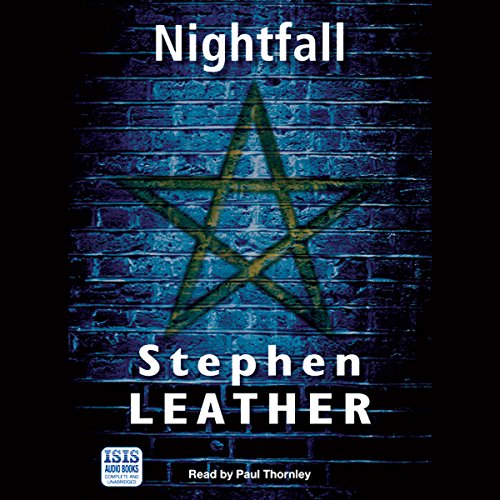 “You’re going to hell, Jack Nightingale”: They are words that ended his police career. Now Jack’s a struggling private detective – and the chilling words come back to haunt him.

Nightingale’s life is turned upside down the day that he inherits a mansion from a man who claims to be his father. It comes with a warning that Nightingale’s soul was sold at birth and a devil will come to claim it on his 33rd birthday – just three weeks away.

Jack doesn’t believe in Hell, but when people close to him start to die horribly, he is led to the inescapable conclusion that real evil may be at work. And that if he doesn’t find a way out, he’ll be damned in hell for eternity.

I had no idea what to expect with this novel or this author. I wasn't amazing, or even unique, but it also wasn't predictable. Cop-turned-detective is such an old, played-out concept, and I usually have zero patience for it. The fact that I listened long enough to get into this one is something in itself.

And then the direction it takes is unusual and interesting. Not as dark and scary as I wanted it to be, but maybe it wasn't meant to be that kind of novel. I would recommend this book without reservation.

Part detective novel, part paranormal thriller, Nightfall took the best from both genres and kept me interested from beginning to end. The book is paced well and pulled me into the plot immediately. The subject matter is dark but not overly gruesome. There were a few points when I felt Jack's dialog with secondary characters became a little too repetitive. While the story is unique, many of Jack's "creepy" experiences are things I've seen in horror movies many times over. Regardless, the book was a lot of fun and I'd recommend it. Definitely don't judge the book by the name. "Nightfall" had virtually nothing to do with the story at all. I can think of a dozen better titles.

The narration is excellent and easy to listen to. Within minutes you understand exactly what Jack is all about. Even the female voices are well done and never seem strange or out of place coming from this narrator.

Sometimes you take a chance and find a hidden gem, sometimes not so much. I really lucked out this time! I had no idea what to expect - bought the title based off the reviews and because (I think) it was in a sale over Christmas and it sounded like something I would enjoy. I did, very much. The story was gripping, enough that it over rode some of my minor annoyances with the writing, particularly the continual reference to Jack's smoking - not sure why there was such an emphasis on that because it really didn't add anything to the plot. There were other parts where I felt some editing would have helped but since I just finished this and about to start the second book in the series within the next 24 hours, obviously not a major hindrance.

Loved every minute of it!

Not a single bit of filler - something for everyone! Mystery, intrigue, psychological and paranormal thriller! Loved it!

Would you listen to Nightfall again? Why?

It was a good book and I would listen again if I were going on a long drive with someone who has not heard it.

What other book might you compare Nightfall to and why?

The scene where Jack tricks one of the devil's minions.

Selling your soul isn't the only option.

What made the experience of listening to Nightfall the most enjoyable?

Two things I have to have when listening to a book...Good Story and Really good Narrater. This book catches you right from the start and doesn't let go. I'll be looking to find something else that Paul Thornley narrated.

The way the story unfolded. It seemed you as the listener went through the thought process with Jack when he's trying to figure out WHAT IS GOING ON.

When he confronts the devil to get his soul back.

A lot of faffing around where everything of any actual import takes place in the last few chapters. You could pretty much just read those and be done with it.

But since Mike Carey is unlikely to ever complete the Felix Caster Story arc. Well not now he’s got Zombies. This will have to do.

I hope the series improves...

What a gripping tale.

I have never come across Stephen Leather's books before, but if this is indicative of the standard of his stories, I will be looking for more in the future. I was so gripped by the tension of Jack Nightingale being surrounded by death and mayhem as he tries to find out the truth about his birth and the fate that awaits him on his 33rd birthday that I stayed awake half the night listening, because I just had to know what happened next. It is a long book, but my attention never wavered, which is rare. I recommend this as a jolly good 'read' to anyone who enjoys thrillers. A beautiful reading job by Paul Thornley, whose voice was perfect for the character, was the icing on the cake.

I love all of Stephen Leather's books but this in my opinion is his best by far a really gripping listen, the Dan Shepperd books are fantastic but this is totaly different and Paul Thornley in my opinion is a fantastic narrator, try listening to this while walking the dog at night really does make you keep looking behind you.

Thoroughly enjoyable and unpredictable I would have stopped listening if it hadn't been as the constant "said (pause) nightingale" nearly drove me mad.

This book is more Dennis Wheatley thand Stephen King so don't expect gory goings on or aliens in the plot. I loved the narration and it was so good to listen to a British accent for a change. Jack Nightingale is a rather likeable sceptic and although I thought parts of the book dwelt a little too much on death, making it a bit morbid in parts, I really enjoyed it and can't wait to listen to the sequel.

My first Stephen Leather. I'd read so much about him being a mainstream star who'd decided to self-publish that I thought I'd give his work a go. The supernatural theme was unusual and added interest when teamed with the otherwise slightly formulaic device of the jaded detective/PI character (hard-smoking, hard-drinking, world-weary and cynical, with a pretty female sidekick). I've previously enjoyed the narrator's work and a good narrator is key to the success of any audiobook, but on this occasion the narrator was slightly irritating (the emphasis and slight pause on 'said' became wearing after a while: "SAID...Jenny" "SAID... Nightingale"). I will probably look for other Stephen Leather books, but not for a while. This was one of those 'also ran' audiobooks that didn't exactly disappoint but didn't wow either.

An unusual storyline, supernatural but down to earth due to the brilliant narration of Paul Thornley.
Jack Nightingale's birthday is approaching, but he receives the unwelcome news that his soul has been traded and will be given up when he reaches his 33rd birthday. Various people repeat 'You're going to hell Jack Nightingale' and he has a race against time to find out what it's all about and save himself. Very different, looking forward to the next book.

Avoid. One of the worst books I've listened to.

What start's out as an interesting premise soon descends in a dreary, sexist, slog. Hard work from about 1/5 onwards. The performance was ok but to be fair the narrator had poor material to work with. Honestly, at points it reads like it's written by a poor GCSE pupil. Not scary in the slightest and very disappointing. Will not be continuing with this

I found it difficult to keep going with this book. absolutely nothing happens until the end. It was very repetitive. Smokes Marlboro, drinks whisky and drives his MG whilst constantly asking if people believe in the devil. Meanwhile his friends and family are dropping dead and he still doesn't seem affected at all. The Narrator was boring, If anyone actually speaks like Jack I'd fall asleep in their company.
Wouldn't recommend it.

Great story concept but sadly it's construction is just a little too flimsy to contain a soul of its own.

Not an awful story not an excellent one either. I discovered Jack Nightingale through the short story compilation, which I thoroughly enjoyed, so I eagerly bought this one as a result. Sadly I was rather disappointed. This just felt like, what could easily have been another great short story, that had been heavily fleshed out by a lot of rather inane, and extremely repetitive, dialogue. One thing I really can't understand, is why there is so much emphasis put on cigarettes?! I know it's pretty standard for a character such as Nightingale to be a smoker - it's actually rather clichéd and stereotypical to be honest- but does it really need to be referred to quite so frequently?? The narrator does his job well enough, and does manage to breath life into a few of the weaker characters. I do wonder if his interpretation of Jack was influenced by John Constantine, & in turn, if Mat Ryan's portrayal of Constantine, in the eponymous tv series, was influenced by this narration? Anyway, if you want a simple but entertaining story, that you don't have to think particularly hard about, give it a try. If you want something challenging and thought provoking I'd try something else.

listened to it a second time! Freaking awesome!! this is an incredible series and predict it will become a cult following.

Normally sci fi is my scene but this was good. Kept me wanting to read more.

It wasn't just the endless smoking that turned me off this book. I struggled to like the main character, which is not necessarily a bad thing, but I also found the plot, supporting characters and writing mundane. Ouch.