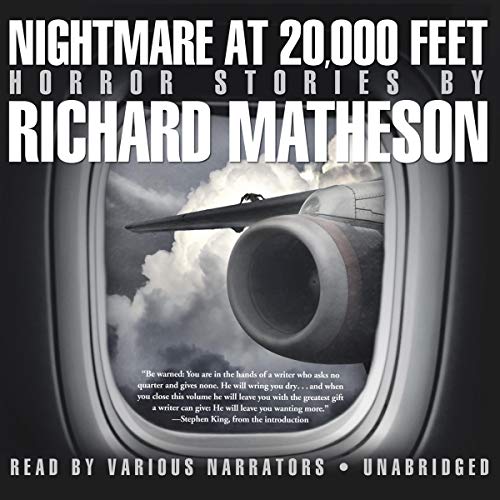 One of the finest and most influential horror writers of the 20th century, Richard Matheson (I Am Legend, The Incredible Shrinking Man, Somewhere in Time) has left his stamp on the collective imagination. Here are more than 20 of Matheson's most memorable tales of fear and paranoia, personally selected by the author. Many of these stories have already entered into popular culture, including the title story, which became a landmark episode of The Twilight Zone, and "Duel", the nail-biting tale of man versus machine that inspired Steven Spielberg's first film.

Find out why Stephen King (who wrote the introduction) has called Matheson one of his favorite writers.

"The well-known title tale about a nervous air traveler is a showcase for the author's trademark less-is-more prose style, which suspensefully delineates a psychological tug-of-war between man and a monster that may be purely imagined. Timeless in their simplicity, [Matheson's] stories are also relentless in their approach to basic fears." (Publishers Weekly)

What listeners say about Nightmare at 20,000 Feet

Waste of a credit

I started and quit on this 2 part book several times, before I finally suffered through to the merciful end.There are plenty of better syfy authors to choose from. DON'T waste your credit!

If you like feeling uncomfortable, this is the book for you.

Richard Matheson was an author that knew what it meant to be human, that to feel life you must also be touched by fear and paranoia. These stories will get under you skin and come home with you. If you enjoy the original “Twilight Zone,” you’ll feel right at home. The performances where all well done. Overall, I came out of this anthology craving more Matheson stories.

Great stories. I was happy to get turned on to Richard Matheson and wish I would have discovered him sooner. My only complaint is that the advertising text on Audible makes it appear as if "Duel" is part of this collection, and it's not. "Duel" was a major reason I bought the book and to not have it a part of the collection was very disappointing. That said, the book is still worth the money.

I've listened to numerous short story horror collections through
Audible and have to say that this is one of the finest. Unlike many other collections which tend to meander, wandering in and out of the horror genre, Mr Matheson's writing is pure terror; bold, original (even against contemporary authors) and, to quote Mr. King's introduction, 'unrelenting'. From the opening tale Matheson puts you on the edge of your seat and then never gives you a moments' rest! Well narrated, nice clear recording.

dark fantasy, but some of the stories are recycled

I would rerecord any narrations by Yuri Rasovsky. Many of the stories were recycled from the short stories in the I Am Leged collection.

The stories were so dark, I have listened to many Richard Matheson Stories, but these are easily the darkest and angriest

Was Nightmare at 20,000 Feet worth the listening time?

I really thought these were great stories contrary to what other reviewers may say they were good. the narrators were very good. I have enjoyed listening to these stories.

I couldn't listen to Yuri speak anymore. He absolutely ruined "The White Dress" for me. I've read everything Matheson has ever written, and this made me ill. The others were just fine though.

I can see how King was influenced to write his greatest works. Matheson is the true OG of Horror and I love it! A lot of his stories left you where you stood. I'd be in such shock and awe, that I would have to replay certain parts of the stories to make sure I understood what just happen! I didn't want it to end! But I also had to take breaks because sometimes it was a little much. Just enough to get my grip back on reality. Awesome read(s)!

I knew most of these stories (or versions of) but still found them enjoyable. I would definatley recommend it to the younger generaton who may not know the old sstories and like fiction. Despite the age, the stories are well written and still relatable.

This is a great collection of classic tales by a great old-school horror author.

Most of the 1 star reviews are from people who don't realize how old his works are, have never heard of him, and/or don't even comprehend that all of the stories are by the same person.

this is a must for any horror or quirky twilight zone fans.Must admit i only downloaded because of the intro from Stephen King but so glad i did really enjoyed this collection of short stories.Highly recommended

They are, I believe, chronlogically ordered and so there is some variation in quality. Some readers are better than others but in general they are excellent. Conrad John Schuck may be an acquired taste...but I have come to like him best - especially reading "Wet Straw".

I think anyone who wants to understand modern horror writing should give this a chance and listen to every story carefully.

The title says it all, the first one was an episode of the Twilight Zone movie, not recommended for those with a fear of flying!

Some good, some incomprehensible to me.

I enjoyed a lot of these stories, especially the title one. Some of them are more accessible than others, with some of them leaving me wondering what actually happened. There were just a couple which I did not reach the end of, skipping on to the next. as a big fan of the author, I would say his novels are better than his short stories, only because when he writes a full novel he is committing time and effort to a good idea from the start. With some of the shorts, you feel they are like 'fast-food' versions of his ability - knocked up over a day or so. The narrator does an excellent, expressive job of the stories.

the worst audio book I have ever listened to

I would have to say that this is the worst audio book that I have ever attempted to listen to. I say attempted as I gave up on the whole thing having flicked through the first 6 short stories having to give up on each on due to either totally lame story lines or terrible and in one instance intelligible narration. I appreciate that everyone has different tastes, but this is terrible. I was particularly drawn to this book as Stephen King does the intro and I enjoy a number of his books so thought (foolishly) that they would be of a similar caliber. If I know how to ask Audible for a refund I would do as this is so bad. If you are looking at buying this one, please save your money and move on to another book.

The first story was good but frustrating and not particularly scary. Thought the other stories a little strange as every one seem to finish abruptly leaving the outcome to your imagination. Not my cup of tea I'm afraid, stopped listening after half a dozen stories.