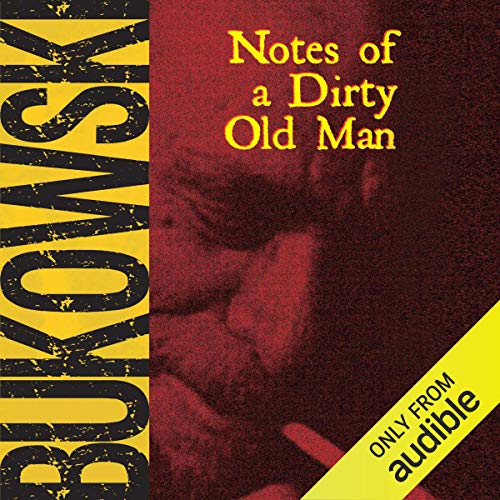 Notes of a Dirty Old Man

Written by: Charles Bukowski
Narrated by: Will Patton
Free with 30-day trial

"He loads his head full of coal and diamonds shoot out of his finger tips. What a trick. The mole genius has left us with another digest. It's a full house - read 'em and weep." - Tom Waits

Born from Bukowski's columns, the LA underground press of the 1960s, Bukowski defined his early alter ego, Hank Chinaski, as a self-described dirty old man who eyes his defeatist attitude about himself with his clarity to see humor and holiness in others. Addictive and instructive listening, Bukowski delivers the humanity and intelligence of all the unseen. Filled with his usual obsessions - sex, booze, gambling - Notes features Bukowski's offbeat insights into politics and literature, and his tortured, violent relationships.

"People come to my door - too many of them really - and knock to tell me Notes of a Dirty Old Man turns them on. A bum off the road brings in a gypsy and his wife and we talk...drink half the night. A long distance operator from Newburgh, N.Y. sends me money. She wants me to give up drinking beer and to eat well. I hear from a madman who calls himself 'King Arthur' and lives on Vine Street in Hollywood and wants to help me write my column. A doctor comes to my door: 'I read your column and think I can help you. I used to be a psychiatrist.' I send him away...."

"Bukowski writes like a latter-day Celine, a wise fool talking straight from the gut about the futility and beauty of life...." (Publishers Weekly)

OBIE winner Will Patton (Remember the Titans, The Good Wife, Armageddon) recreates Bukowski in his visceral prime, along with every eye-popping character in his life, each adversary, lover, and stranger in a lost city.

More about the author:

Charles Bukowski is one of America's best-known contemporary writers of poetry and prose, and, many would claim, its most influential and imitated poet. He was born in Andernach, Germany and raised in Los Angeles, where he lived for 50 years. He published his first story in 1944, when he was 24, and began writing poetry at the age of 35. He died in San Pedro, California, on March 9, 1994, at the age of 73, shortly after completing his last novel, Pulp.

What listeners say about Notes of a Dirty Old Man

Would you listen to Notes of a Dirty Old Man again? Why?

Yes. Beneath the dirt it's hilarious.

What other book might you compare Notes of a Dirty Old Man to and why?

Journey to the End of the Night

Have you listened to any of Will Patton’s other performances before? How does this one compare?

Christian Baskous did such a great job with Bukowski's novels and stories I wondered why they would switch to a guy who sounded like an old timey gold prospector driven mad by the sun but Will quickly won me over.

Fun for the whole family!

I enjoyed Will Patton's performance of Notes so much I am going to buy the other City Lights audiobooks.

THE TRUTH OF TODAY

and now we have the head shrinkers the thinks the appointed presidential boards. All trying to figure out who's glad who's mad who's sad who's right who's wrong.

The writing is poetry, the narrator, my favorite
This is a wonderful read!! I’ve purchased more of Bukowski.

if you are interested in the perspective or archetype of the dirty old man this should give you plenty of information. I loved the collection of short stories! I found it refreshing that someone could be so pure so honest and descriptive in their writing.

this is the first book I've listened to by Charles

oh shit! this guy wasn't off the chain. he broke the motherfucker! I didn't know you could write this way. unapologetically real and raw and honest. I laughed in places so hard that I cried. dude, where have you been my whole life?

as for the performance, it was second to none! great reading. awesome!

if you're easily offended move along. nothing to see here.

My first Bukowski and I loved it. Will Patton was brilliant. it's probably not for everyone but I strongly recommend it, at least one Bukowski should be on your bucket list.

this is my first time reading this one. I am a bukowski fan but now I a bukowski worshiper. this narrator is so perfect that it is a visceral experience

Good, some of the stories, I've heard before. Very funny all and all. Word.word. Word.

This is my first introduction to Bukowski and already I think he will shape up to be one of my all-time favorites. A real joy to read.

The performance is fantastic!

I absolutely loved the performance! I thought the narrator fit perfectly. His acting was great.

The book felt like writings from some drugged out high school kid that thinks his writings are deep. If you think adding bad words make something deeply profound, this book is perfect for you!

You know what to expect with Bukowski and given that it’s called ‘Notes of a dirty old man ‘ the filth ratio is going to be quite high . This is Bukowski as his short story telling best . Many of the tales will be familiar as with rewrites they appeared in his novels .
The narration on this is ok . At first I couldn’t tune into it all . The reader didn’t capture Bukowski’s way of speaking and when a lot of it is told first person it seemed to be missing the mark . However over time I got used to the narrators voice . The biggest problem I have with this release is the shocking production values . There are over forty stories and the only indication we have that one story has ended and another begun is a slight pause . No musical interlude , no title given at the start of the story . It made it difficult to tune in sometimes. Overall a bit uninspiring unlike the writing itself .

Will Paton brings alive imaginative but disturbing stories. Bukowski is not to all tastes and some of the material is pretty tough going, but with Will Paton's brilliant performance I listened to this in one sitting on a day off. It is little wonder he has won awards for his narrations, recommended for his performance alone.

Paton's narrating is perfect as always.

He effortlessly brings Bukowski's words to life, and ensures you are entirely engrossed from the first seconds.

Notes is a thoroughly enjoyable 'read' , as expected for Bukowski.

A genuine pleasure to listen to from beginning to end. Get it in your library!

Well read rambling misogynistic beatnik tales of the underbelly of society. Frequently drunk, philandering adventures, delightful short stories and frequently twisted and insane thoughts on paper. It's still so fresh and real. We'll worth a listen.

Some of the stories are brilliant, one or two seem to be pushing tastless nastiness for the pure hell of it. Most of the collection is wise-cracking funny and insightful.

Don't look for political correctness here just the legend that is Charles Bukowski, and what a great narration!

and Loved every moment of it. If you enjoy Charles Bukowski, you will enjoy this.