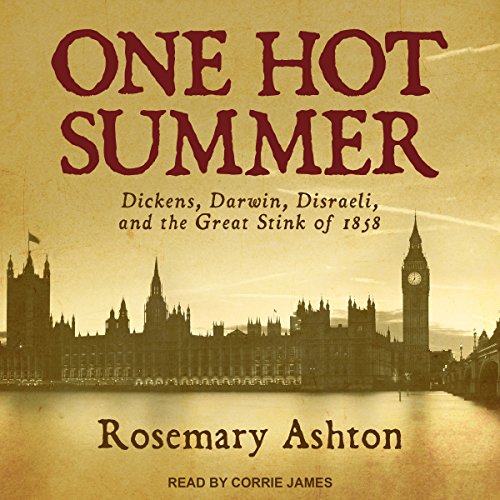 While 1858 in London may have been noteworthy for its broiling summer months and the related stench of the sewage-filled Thames River, the year is otherwise little remembered. And yet, historian Rosemary Ashton reveals in this compelling microhistory, 1858 was marked by significant, if unrecognized, turning points. For ordinary people, and also for the rich, famous, and powerful, the months from May to August turned out to be a summer of consequence.

Ashton mines Victorian letters and gossip, diaries, court records, newspapers, and other contemporary sources to uncover historically crucial moments in the lives of three protagonists - Charles Dickens, Charles Darwin, and Benjamin Disraeli. She also introduces others who gained renown in the headlines of the day, among them George Eliot, Karl Marx, William Thackeray, and Edward Bulwer Lytton. Ashton reveals invisible threads of connection among Londoners at every social level in 1858, bringing the celebrated city and its citizens vibrantly to life.

What listeners say about One Hot Summer

While the book was interesting, it tended to focus on Dickens for long periods rather than other figures or the overall history. Since his life is well known already, this seemed unnecessary.

Make sure you can listen in large chunks. It is easy to loose track of what is going on if you are interrupted.

3.5 stars: I very much enjoyed this book. It examines the summer of 1858 and the months that surround that summer to delve into London in that period in a social history. I liked the idea of telling history from the news bulletins of the period, minutes of events, and the letters of the principle cast. In fairness it does not develop any very significant connections between the three great figures and / or much connect to the heat wave itself but I felt this was not a loss as such. Would have liked more on the Atlantic telegraph pole.

Will it never end?

Read as part of a book club. I thought it was going to be the story of the building of the intersecting sewers and the embanking of the Thames. It's not. What it is, is repetitive, dull, but well-researched histories of three victorians whose connection to one another seems to be that they're men, that their surnames begin with the letter D and that they were alive during the hot summer of 1858, other than that, not much.

As someone who loves a historical fact book, I really enjoyed this. The 1850 is fascinating; easy to image, so close in time and yet totally different to today.
Although there was a strong story at times I was overwhelmed with facts. The researching must have been immense.

Informative and highly entertaining in parts but I found it disappointingly dull and disjointed in parts too.