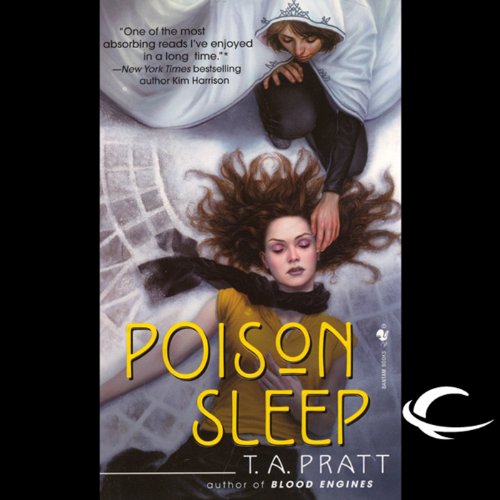 Someone wants Marla Mason dead. Usually that's not news. As chief sorcerer of Felport, someone always wants her dead. But this time she's the target of a renegade assassin who specializes in killing his victims over days, months, or even years. Not to mention a mysterious knife-wielding killer in black who pops up in the most unexpected places.

To make matters worse, an inmate has broken out of the Blackwing Institute for criminally insane sorcerers - a troubled psychic who can literally reweave the fabric of reality to match her own traumatic past.

Together they're searching the rapidly transforming streets of Felport for a woman who's become the Typhoid Mary of nightmares, infecting everything - and everyone - she touches with a chaos worse than death itself.

What listeners say about Poison Sleep

Best of a great series.

Dear T.A. Pratt, I love you. I love Marla, and I hope she can bring "you know who" back (no spoilers here!). Please tell me that you are already working on the next book. Please? Pretty please? Did I mention that I love you?

This Series is AMAZING!

T.A. Pratt has a wonderful imagination, Ive just finished the fourth book of this series and I must say, its been one heck of a ride. Great stories, the evolution of the characters was fascinating to watch. The magical world hes created is rich in detail and so interesting! After this book, read Death Reign then Spell Games. This series is the best urban fantasy Ive read, by far.

I was put off from the storyline of "Bone Shop" and "Blood Engines" by all the sex and foul language, but this one was much less bothersome, and I liked Genevive a lot. Although I wish you would kill so many good characters, it's annoying. I really liked Ted.

Where does Poison Sleep rank among all the audiobooks you’ve listened to so far?

Hard to answer a question like this. How can you rate this against a romance, or any other style of story? Maybe the middle?

What was one of the most memorable moments of Poison Sleep?

Yes. I got my feet wet with the first one and this one was better. I had to drag myself away.

I thought this book was better than the first one and I think that T.A. Pratt has a better grasp of how to write Marla so that she isn't so one dimensional as she was in the start of the first book.

Not as good as Blood Engines...

I love Rondeau! He's funny, really funny, and loyal. Nothing seems to phase him. And, he compliments Marla well.

I love Jessica Almasy! She's one of my favorites. Her voices are distinct and very believable.

Though this is a good book, it's not as good as the first book, in my opinion.

I loved Bone Shop and Blood Engines, but this one dragged in the middle, which almost made me return it! I'm glad I listened through the middle, though, because I enjoyed the end a lot! I'm just not sure if I want to read another Marla Mason title.

A Good Start to an Enjoyable Series!

If you could sum up Poison Sleep in three words, what would they be?

What other book might you compare Poison Sleep to and why?

If Harry Dresden had a female counterpart, Marla Mason would be her.

Jessica Almasy has a good grown up voice, gives Marla a mature tone.