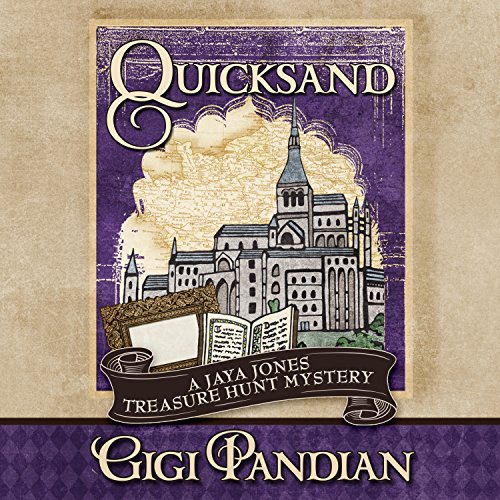 Historian Jaya Jones finds herself on the wrong side of the law during an art heist at the Louvre. To redeem herself, she follows clues from an illuminated manuscript that lead from the cobblestone streets of Paris to the quicksand-surrounded fortress of Mont Saint-Michel. With the help of enigmatic Lane Peters and a 90-year-old stage magician, Jaya delves into France's colonial past in India to clear her name and catch a killer.

"Charming characters, a hint of romantic conflict, and just the right amount of danger will garner more fans for this cozy series." ( Publishers Weekly)

What was one of the most memorable moments of Quicksand?

Jaya Jones and Gigi Pandian Fan for sure.

This was a thrilling Treasure Hunt that Jaya was presented with. Finding a long lost treasure and restoring the reputation of her family's hero were impossible to resist.

I enjoyed the alternating POV(Points of View) between Jaya and her great-granduncle Anand.

While understanding why he did it, I was sad that Lane left Jaya for her own good. I was tickled that he couldn't help but want to protect her afterwards. I loved the way that Jaya put him told him exactly what she thought of his unilateral decision to end their relationship. These two are an entertaining pair.