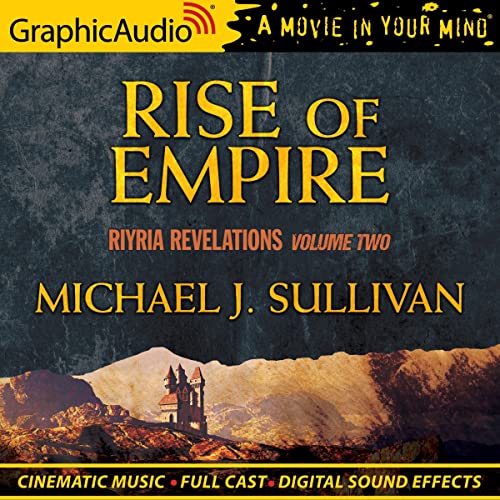 Rise of Empire contains Nyphron Rising and The Emerald Storm, books 3 and 4 of Riyria Revelations.

A puppet is crowned. The true heir remains hidden. A rogue's secret could change everything.

War has come to Melengar. To save her kingdom, Princess Arista runs a desperate gamble when she defies her brother and hires Royce and Hadrian for a dangerous mission. As the power of the Nyphron Empire grows, so does Royce's suspicion that the wizard Esrahaddon is using the thieves as pawns in his own game. To find the truth, he must unravel the secret of Hadrian's past - what he discovers may end their friendship and break Riyria in two.

A message is intercepted. A sinister plan launched. Two thieves stand in the way.

Ex-mercenary Hadrian Blackwater sets course on a high seas adventure to find the lost Heir of Novron. His only hope lies in confronting the ruthless and cunning Merrick Marius. Fearing his friend is not up to the challenge, Royce Melborn joins his old partner for one last mission. Their journey finds them adrift amid treachery and betrayals forcing Hadrian to face a past he hoped never to see again.

What listeners say about Rise of Empire [Dramatized Adaptation]

the audio went from hard to hear to ear piercing loud repeatedly. the background music was unnecessary, loud, and distracting. the sound effects were poorly done, and made the dialog difficult to hear and understand.
Why was there ending credits at 4 different places in the novel?

distracting and drawn out

got dramatized version on accident switching to regular version hopefully it will be better Reynolds reads are usually pretty good.

I've gone through a lot of fantasy series within the last 10 years and I have to say this Author is now a favorite right along side the likes of Salvatore. I started with Legends of the First Empire and won't stop till I've read all his works.

I love Sullivan's books, but the narration in this version is horrific. Do yourself a favor. Save yourself a credit. Get the other version.

weakest of the three

The emerald storm is the weakest of the 6 books and that has not changed since I first read it. it's still a great series.

I love the story, the voice actors are phenomenal. The ambient noises in the background are very distracting from the story. Seagulls squawking, loud waves crashing around the ship, etc. It’s very much like trying to watch a movie and your dog is having a grand time with a squeaky chew toy.
Then there is the credits. They break the book into several parts. The beginning and end of each part they roll the credits, which goes on for three minutes. I understand the book was originally two books. But when it was decided to merge the two, it effectively became one book. I honestly do not care about the names of everyone that contributed to make this audio book. If I did, one time is enough.
Overall I find this production annoying, and I’m not sure if I’ll be able to finish listening.

The “dramatacised” version (“story on your mind”) is hard to follow, poorly acted, and altogether makes a fun story subpar. I’m happy it was not my first experience with Michael J Sullivan or I would have never tried another.
Tim Gerard Reynolds as narrator make the whole experience FUN and easy to follow. I wish I could refund the other versions.

Bought this by mistake

And it wasnt as bad as I feared. I do prefer one reader though. But my main issue with this dramatization is the commercial sequences in between books! I already bought the book, I dont want to know what it is 6 times during the reading...

The cast did a fantastic job but I think the book was very much let down by the incredibly dull narrator. He sounds like one of those early generation text to speech programs.