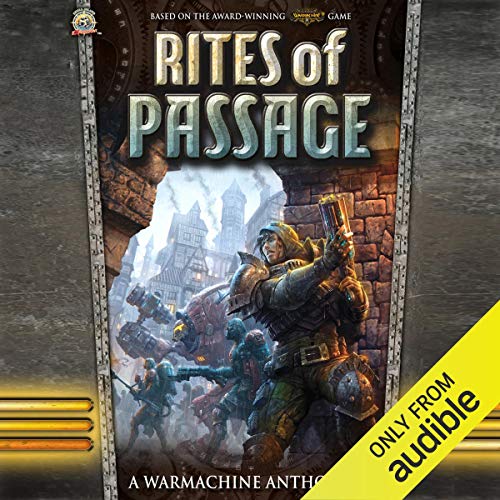 In the beginning, great power is only great potential.... Renowned for both martial and arcane skills, the mighty warcasters of the Iron Kingdoms possess the unique gift of bonding with and commanding mighty warjacks on the field of battle. Yet despite their inborn abilities, these powerful soldier-sorcerers began as novices, forced to harness their talents in rigorously structured military training programs or through the brutal crucible of battle.

Rites of Passage tells the tales of six novice warcasters, some from the great military powers of the Iron Kingdoms and others destined for a more independent path. Journey to the Cygnaran front lines with Lieutenant Allison Jakes as she learns the difficult lessons of what it means to be a battlefield commander. Balance faith with arcane might alongside Initiate Tristan Durant of the Protectorate of Menoth. Navigate the treacherous politics of the Druzhina, Khador's military training academy, with Kovnik Andrei Malakov.

Take to the bloody high seas aboard a Cryxian ship with the ruthless pirate raider Aiakos. Follow the trials of the assassin initiate Elara as she struggles to accept her changed destiny as a warcaster within the Retribution of Scyrah. Finally, prowl the war-torn streets of occupied Llael with the gutter rat Gastone Crosse as he becomes the most wanted man in Merywyn.

One bad narrator, the rest was great

If you could sum up Rites of Passage in three words, what would they be?

I enjoyed the character Aiakos, because it's always interesting to see into the mind of a 'bad guy' and what motivates them to do what they do. Bad guys who are just bad because they 'enjoy' it and are there merely as an excuse for the good guy to have a force to deal with are always boring. Aikos had a pretty good back story, and they detailed out his situation well.

Did Bryan Reid and Mike Ortego do a good job differentiating all the characters? How?

Neither narrator did a perticularly good job of differentiating character voices, but the books are pretty short and dont have more than a handful of characters anyway so its not a big deal.

Sense its a collection of short stories it gives you good breaks to stop and come back later. It was good to listen to while I worked on art.

Bryan Reid's Narration was terrible. He sounded half asleep, or possibly buzzed. He slurs his words and speaks in a monotone, emphasizing awkward words in sentences. The stories he narrated were almost un-listenable for me. The only reason I stuck with them was because I wanted to know the story, which was hard to do because I kept zoning out with his droning monotone. He seriously sounds like he recorded these at 4 in the morning after a long night at the bar. If I had been a producer on this audio book, there is no way I would have allowed this product to ship with his performance. Luckly, Mike Ortego's Narration was great and makes up for it, and his 3 stories are worth your credit alone.

Great stories, not so great narrator

Mike Ortega did a fantastic job, but Bryan Reid was ponderous and a bit monotone. The stories are more than worth listening to him though, especially if you speed him up to 1.25 or 1.5 playback.

The book is broken up into 6 stories. The narrator for the 2nd, 3rd, and 4th characters is great, but the other narrator is just awful. His speech is so staccato, it kinda comes across as unnatural, turning stories I didn't care about even worse, and the ones I did really want to know and listen to became chores. Whenever possible, I will definitely avoid Brian Reid in the future.

You get a fantastic insihht into the new generation of warcasters wandering around the iron kingdoms.

Each of the 6 stories had great characters and plots. For someone who is getting into Warmachine lore, this is a good one. Actual performance of the narrator were good, but didn't add anything to the experience.

Loved every story. Great insight on the factions of Warmachine. A definite entry into any collection.