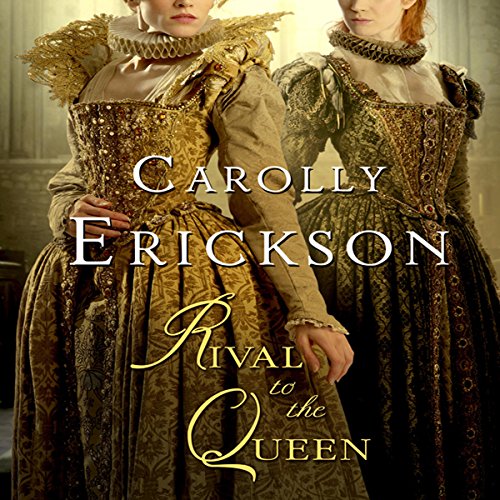 From the New York Times best-selling author of The Last Wife of Henry VIII comes a novel about the bitter rivalry between Queen Elizabeth I and her fascinating cousin, Lettice Knollys, for the love of one extraordinary man.

Powerful, dramatic, and full of the rich history that has made Carolly Erickson’s novels perennial best sellers, this is the story of the only woman to ever stand up to the Virgin Queen: her own cousin, Lettie Knollys. Far more attractive than the queen, Lettie soon won the attention of the handsome and ambitious Robert Dudley, Earl of Leicester, a man so enamored of the queen and determined to share her throne that it was rumored he had murdered his own wife in order to become her royal consort. The enigmatic Elizabeth allowed Dudley into her heart, and relied on his devoted service, but shied away from the personal and political risks of marriage.

When Elizabeth discovered that he had married her cousin Lettie in secret, Lettie would pay a terrible price, fighting to keep her husband’s love and ultimately losing her beloved son, the Earl of Essex, to the queen’s headsman. This is the unforgettable story of two women related by blood, yet destined to clash over one of Tudor England’s most charismatic men.

What listeners say about Rival to the Queen

Much better than expected.

You never know with audiobooks! Sometimes an author can be one of your absolute favorites (and Erickson is one of mine) but poor narration or a slow plot can make listening to a book sheer torture. Thankfully this audiobook was a really pleasant listening experience. Susan Lyons did a very good job and the book held my attention from beginning to end. This book is a little gritty at parts, just a warning to those faint of heart. I'm not squeamish, but in the beginning there were a few parts that described the torture and killing of protestants that I kind of fast forwarded through! Overall an interesting and insightful book. I liked it.

I'm a fan of historical fiction; I appreciate that the genre isn't all about sticking to the facts; it's never intended to be a history lesson. I can appreciate a story in which the characters are portrayed far differently than common understanding dictates; this story does that, with it's fairly negative portrayal of Queen Elizabeth. I'm fine with that.

That said, this book just hit all the wrong notes with me. It's not the author's version of history that I disagree with - it's her writing style. The protagonist, Lettie Knollys, is grating and annoying; she prattles on endlessly about how stunningly beautiful she is, and how all the other females in the book (including the queen) treat her badly because they're jealous of her.

Because of the way the book moves through time in huge batches, you never get a sense of anything else about Lettie, except that she is, by her own account, really lovely. There isn't much dialogue, and what dialogue there is comes across as overly dramatic.

If you're a fan of Philippa Gregory, you'll probably be very disappointed with this book. I actually bought it because the narrator, Susan Lyons, did the narration for "The Other Boleyn Girl", which is also a first-person story about Mary Boleyn, who is Lettie's grandmother. I thought it would be cool and interesting to follow the fictionalized version of the family, as it were. Terrible mistake. Susan Lyons is this book's only redeeming characteristic.

As a fan of period pieces, I was hoping to enjoy this book and I did but not 100%. The story was told well and kept a good pace, but some of the characters did not seem to have sufficient motivation for their deeds and at some parts, it seemed the same story over and over again about the rivalry and not much more. Yes this is the title to the book but I would have enjoyed a bit more richness to the details and environment to get the imagination going. I still enjoyed it, but it did not hold my attention as much as other similar style books.

I really enjoyed this audiobook. The narrater has a really lovely, rich voice, which well suits the character of a Great Tudor Lady. It’s a great historical fiction book, written in first person, and I found it very engaging. Given how close Lady Leicester was in such a myriad of ways to Elizabeth I, it’s a shame there isn’t more information preserved about her. As all woman, she is largely silent in history, but I have no doubt she was an incredible lady. I enjoyed the book very much!