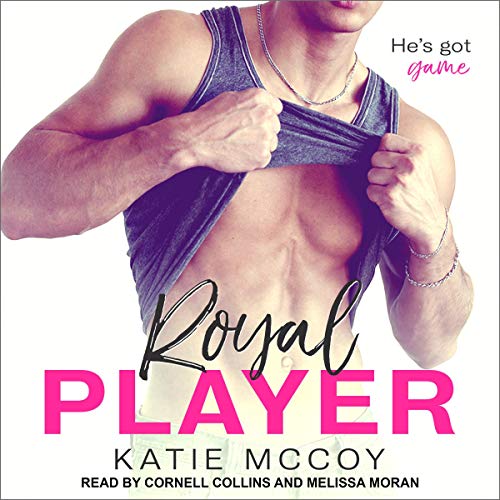 Charlie Davenport is the bad boy of British tennis - and third in line to the throne. He's a beast on the courts and a wild animal in bed (according to all the tabloids). Girls are lining up for chance at his crown jewels, and when I stumble into the wrong Wimbledon dressing room and catch a glimpse of his game, set, and match, I can see why.

So what's a little good luck kiss between friends (I mean, strangers)? I know better than to get involved with a bad boy like Charlie. But now he's on a winning streak, he thinks I'm his lucky charm - and you know what's luckier than a kiss? Everything.

Suddenly, I've got paparazzi on my trail, exes coming out of the woodwork - and you don't know "cutthroat" until you've seen a pack of hungry socialites set loose near the Royal Family. I'm in way over my head, and even worse - I'm falling in love. Can this American girl win her Prince Charming? Or will we both crash out of the championships in flames?

What listeners say about Royal Player

This was my first book/audiobook by Katie McCoy and it was a fun meet cute story. Although Charlie and Emmy has some hurdles to overcome to obtain their HEA, I liked the fact that they were both honest and steadfast in their feelings and opinions. Cornell Collins was a new narrator to me and he did an excellent job. Melissa Moran was phenomenal as always. This was a very enjoyable listen!

Royal Player by Katie McCoy is the first book in her stand-alone contemporary romance series, All-Stars . Told in dual POV between Charlie (the spare prince/Wimbledon tennis ace) and Emmy (the aspiring fashion designer/Wimbledon tea girl) this story is quirky, romantic, and fills the niche of pauper to princess love stories that we all secretly (or not-so-secretly) have wanted to happen at least once in our lives. I find I can really get into the light-hearted romance and writing style of this author and I thoroughly enjoyed this story. With just enough angst to keep it from being all fluff and no substance this was a fab book set in London and centering on Wimbledon. Enjoy!

This book was cute. I enjoyed the storyline and the characters. It was a fun and sexy read.

the story was enjoyable but the male narrator was clearly not a young actor, he sounded like a pensioner which I found off putting. its not his fault he sounds like a fantastic narrator just not for this role.

I usually get sucked into a story, but struggled to get into this book. I guess in part because I have listened to so many books, it takes something special to hold my attention.
I appreciate the narrator's skills but did not think they were suited to the characters.
if you are looking for a romantic story, is books meets the criteria, however it is not the best I have ever listened to.