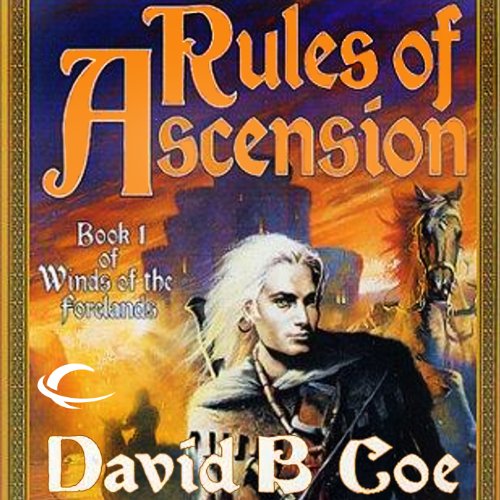 David B. Coe, winner of the William L. Crawford Award for Best First Fantasy Series for the LonTobyn Chronicle, continues his rise to the top rank of fantasy writers with Rules of Ascension, the first novel of an exciting new epic fantasy quartet, Winds of the Forelands.

For centuries the Forelands were disputed by several tribes. Then came the magically gifted Qirsi - physically no match for their foes, but capable of mindsight, creating and controlling mists and fire, and bending solid matter to their purpose. After a Qirsi traitor betrayed his race to save himself, the Qirsi were defeated and dispersed among the seven realms of the Forelands. Those specially endowed Qirsi capable of multiple powers, the Weavers, were all put to death.

For centuries the Forelands enjoyed relative peace. But when Tavis, the heir to the Kingdom of Curgh, is wrongfully blamed for the murder of a noble, the accusation sets in motion a series of events culminating in civil war. The ensuing chaos topples the throne in Eibithar and threatens to rain chaos on all the realms of the Forelands. Tavis, thrust into the center of deadly controversy and stripped of the protection of his family's nobility, turns to the Qirsi, his last remaining hope for redemption.

But another Qirsi traitor, secretly fomenting fear and mistrust among the Dukedoms, seeks to destroy Tavis. Tavis must survive long enough to clear his name and save an entire kingdom.

A powerful, compelling tale set in an unforgettable land, Rules of Ascension will capture your heart and fire your imagination.

I would dearly love to give this book a 5 star rating, but the narration just isn't good enough for it.

I thoroughly enjoyed this fantasy intrigue. After 40 years of fantasy reading, it's a challenge to find a new author with new concepts. I found this series after reading Thieftaker, which is written by the same author under a different name. I'm surpised the Forelands Series hasn't had more attention. The writing is excellent and the plot line engaging. I will definitely be reading the next book in the series.

The narration isn't terrible, don't let it deter you from listening to the book, but it doesn't do the book justice. I would love to hear this book narrated by someone like Kate Reading or Michael Kramer.

The story and narrator are both very good. Grabs your attention pretty quickly. Audible lists book 5 of the series but where are books 2-4?? Disappointing that I can't continue the story.

If you’re in the mood for a story that is incredibly obvious and bland, this story is for you. I think maybe it was written for a younger crowd though so I maybe shouldn’t be too harsh. The narration makes it feel like it’s for 6th graders.

I love these books

okay so love the books love the story and love the narrator except somewhere around chapters 17 or erlier he says the wrong gender for who is talking or thinking a lot... the narrator says he at least 30 times when he is supposed to say she. this is also the 3rd time I have listened to this book and I barely noticed it before but once you notice it you hear it a lot ❤

What does Alpha Trivette bring to the story that you wouldn’t experience if you just read the book?

The narrator is excellent. He changes tones and inflection for each character.

The book ends rather abruptly. We had to start book 2 immediately!

Would you consider the audio edition of Rules of Ascension to be better than the print version?

No. I think in this case my inner voice would be much better for this book than the narrator. Unfortunately, this narrator sounds like he is telling the story to his 10 year old son.

Though in the beginning he is hard to like, Tavis, due to his circumstances and the charges against him, is on the way to becoming a hero.

Would you be willing to try another one of Alpha Trivette’s performances?

I'm not sure yet - I really like the story and the author, D.B. Coe. Might be worth struggling through the narration.

What if you were accused of a horrible crime and you were the only one who knew you were innocent - at least you think you are.

In a nutshell, I think it's a good story, but it sounds like your weird uncle is reading it to you.